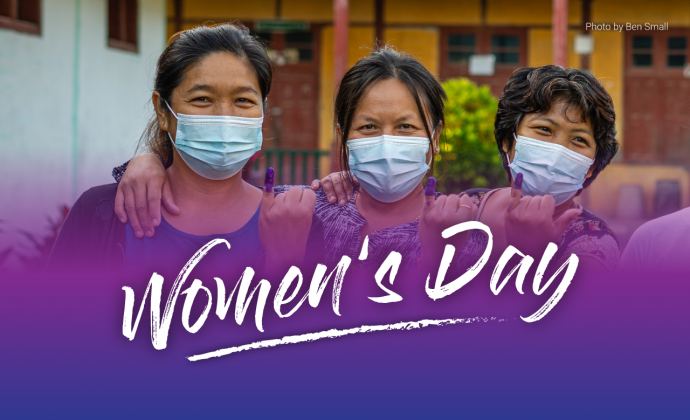 Every year, on March 8, the world celebrates the International Women’s Day, shedding light on the plight of women in pursuit of gender equality. Among them, representation and participation in governance and politics.

Indeed, women have come a long way with the increase in the number of women elected in parliament as well as in high leadership positions and yet they remain disproportionately lower than their male counterparts.

The Convention on the Elimination of All Forms of Discrimination Against Women (CEDAW)1 is one of the key documents that has advanced the causes of women in different aspects of everyday life.

Article 7 enjoins states to "take all appropriate measures to eliminate discrimination against women in the political and public life of the country" ensuring voting rights and the right to contest elections, participate in the formation and implementation of public policy, hold public office, and participate in non-governmental organizations concerned with public and political life.

These are after all fundamental human rights enshrined in international and national covenants, and treaties like the International Covenant on Civil and Political Rights2.

Women in Politics and Governance

According to the review and appraisal in March 2020 of the implementation of the Beijing Declaration and Platform for Action, a policy framework for gender equality and women empowerment, women's representation in national parliaments has doubled from 12 percent in 1995 to an average of 24.3 percent globally in 20193.

Regional data from the World Bank shows that in 2020, the proportion of seats held by women in national parliaments is highest in Latin America & Caribbean region at 32.93 percent and lowest in the Middle East & North Africa region at 16.61 percent4; still far from the 12 percent cited by the UN report in 1995 at 12 percent.

The review also noted that women continue to be "significantly underrepresented in the highest political positions." There were 10 women heads of State and 13 heads of government across 22 counties in October 2019 vs four heads of State and eight prime ministers across 12 counties in 1995. Noteworthy is the increase in the number of women leading ministries beyond social or family-related sectors, such as trade, industry and defense.

Their data shows that in Asia at the single/lower house level, seven countries have been identified with legislated candidate quotas, 10 have reserved seats, six do not have legislated quotas.

The same review of the Beijing Declaration said that the "type of electoral system and the use of legislated quotas have been key in achieving such high representation of women."

But just like most measures, there are pros and cons. International IDEA has noted that quotas are a "controversial measure." Among the pros identified are:

• women are just as qualified as men, but women's qualifications are downgraded and minimized in a male-dominated political system; and

• quotas can contribute to a process of democratization by making the nomination process more transparent and formalized.

Among the cons, however, are:

• quotas are against the principle of equal opportunity for all, since women are given preference over men;

• quotas are undemocratic, because voters should be able to decide who is elected; and

While it cannot be denied that the quota system has contributed to the increase in the number of women in politics, there remains issues that prevent women from fully participating in public political affairs including socioeconomic factors and gender stereotypes and discrimination, among others.

In the larger scheme of things, the deterioration of the quality of democracy has been noted to have contributed to the “backlash” against gender equality. The Beijing Declaration review noted that in 2018, “1.14 billion women lived in countries where civil society was repressed. In that context, the backlash against gender equality is taking the form of regressive legal and policy changes, the hollowing out of institution's mandated to advance gender equality and on the shrinking civic space for women's rights organizations.”

A holistic and sustainable approach to encouraging and enhancing the participation and representation of women, not just is politics and governance, but in everyday life, is needed now more than ever.