Our campaign and advocacy division seeks to complement the entirety of ANFREL’s work by bringing attention to electoral issues in the region. The goal of doing so is to strengthen the resolve of electoral actors in the region to improve elections and bring issues to the public’s attention to raise awareness about the need for improvement. Both will help raise the quality and value of elections.

The means to do the above vary by project but, while doing so, the advocacy and campaign division also promotes the work of our network members to maximize the impact of their work and spread ideas across the region to raise the quality of both elections and election observation groups via the spreading of ideas. The division works to enable ANFREL to act as a bridge between Civil Society Organisations and Electoral Management Bodies in projects such as the formation of the Asian Electoral Stakeholders Forum to declare the Bangkok Declaration on Free and Fair Elections. You can read the full text, see the list of endorsers, and endorse the principles yourself by going to:

More information and background about the Bangkok Declaration and its endorsement is below:

On December 10 and 11, 2012, representatives of Asian electoral management bodies and civil society organizations met in Bangkok for the first-ever regional gathering of these two often disparate groups to promote democratic, transparent elections on the world's most populous continent. The Asian Electoral Stakeholder Forum (AES Forum) convened a two-day conference with participants from 11 Asian electoral management bodies and 30 Asian civil society organizations (representing 17 countries) devoted to advancing the cause of free and fair elections.  Guests from the Libyan, Australian and Mexican electoral management bodies, as well as observers from foreign embassies in Bangkok and from governmental and non-governmental bodies based in Europe and the Americas, were also on hand to witness the event. 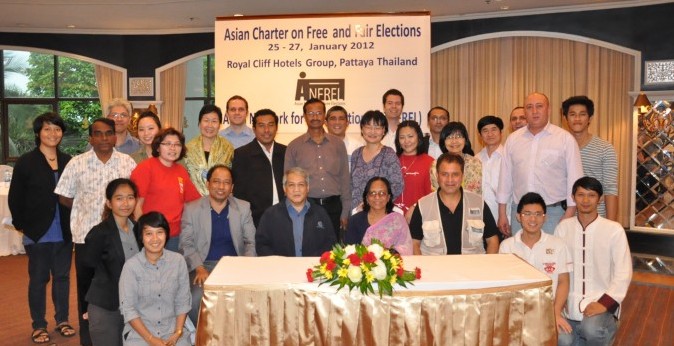 The endorsement of the Bangkok Declaration on Free and Fair Elections was the culmination of a year of effort, which formally began in January 2012 when representatives of election-focused civil society organizations from around Asia met in Pattaya, Thailand to discuss the challenges to free and fair elections that were faced by many countries in the region and how to work to overcome those challenges.

Attendees agreed that a Declaration of Principles could aid their efforts. It would serve to outline the challenges to elections in the region and raise solutions to those challenges using principles that meet accepted international standards for holding free and fair elections. However, they further agreed that such a Declaration must be sensitive to the culture, religion and customary practices in Asia while being reflective of the international norms reflected in such documents as the "Declaration on Criteria for Free and Fair Elections," adopted by the Inter-Parliamentary Council on March 26, 1994.

Over the following months, the civil society representatives worked to write the Bangkok Declaration, using inputs provided by all attendees in the January meeting. After civil society members crafted a draft that reflected Civil Society’s inputs, the draft was then discussed with representatives of several electoral management bodies at a two-day meeting held in September in Bangkok.  The EMB representatives offered a great deal of recommendations and improvements addressing both theoretical and practical concerns from the perspective of an election management professional. Following the September EMB feedback and planning session, further refinements were vetted, discussed, and incorporated into the draft to ensure that the draft reflected both the views of Civil Society and Election Management Bodies.  Finally, the document was ready for a final discussion, which was held at the beginning of the 2-day session in Bangkok, and, on the second day, the Bangkok Declaration was endorsed by the delegates to the AES Forum.

Asia has a huge diversity of types of government, ranging from dictatorships to absolute monarchies to constitutional monarchies to democracies, with many variations on each type.  Notwithstanding this range, elections have become part of the political fabric of most Asian countries, although the degrees of freedom and fairness in elections vary considerably from country to country.  Since World War II, most Asian countries have made at least some progress in moving towards more meaningful elections and real democratization.

The value of democracy (and the value of human rights, of which democracy is a component) has increased throughout Asia during this time, and today there is a conscious effort on the part of the people in each Asian country (and many of their governments) to work towards fully free elections and full democratization.  However, even now, many Asian countries face a continuing challenge in achieving those ends. While most of the countries in Asia share many attributes of a common past, including a history of being subjected to often harsh colonialism followed by independence and the evolution from nominally democratic governments to governments more fully embracing truly democratic principles, it is still not clear why some countries have progressed more than others on the road to real democracy.

In the past, people from many countries discussed the idea for a (non-binding) Asian agreement to complement the "Declaration on Criteria for Free and Fair Elections". Such a document would have its own character and be crafted to be suitable to the prevailing political and cultural conditions in Asia. Through discussions of aspirations and concerns aired by election stakeholders, election management bodies, civil society and election observer groups, an idea was born to organize a series of dialogues to draft such a document for guiding electoral processes more effectively throughout Asia.

The Asian Network for Free Elections, with members across Asia, championed the creation of a mechanism in Asia to address common electoral issues while also advancing the rule of law and honoring the cultures, traditional laws and customs of the many peoples who live in Asia.  Thanks to its years of work in the region, and the deep involvement each ANFREL member has in its own country, the ANFREL network, its members working together, guided the process of creating just such a mechanism. The result is the Bangkok Declaration on Free and Fair Elections, which was endorsed in the inaugural meeting of the Asian Electoral Stakeholder Forum. The declaration will serve as the founding document of the AES Forum and, as such, will guide much of its work in the future.

Objectives of the Bangkok Declaration

The key objective of the Bangkok Declaration on Free and Fair Elections is to "identify the most significant and widespread barriers to free and fair elections in Asia and strengthen the resolve of the Asian people to address them by involving all relevant national, regional and international stakeholders." It seeks to do this by, more specifically, realizing the following objectives:

EMBs and CSOs came together to exchange knowledge, share experiences and strengthen working relationships so that they could collaborate on the Declaration.  Working together, they created a document that is approachable, understandable, and relatable to the public at large.  The Declaration focuses attention on electoral issues that are often overlooked or not understood by the public, which will encourage the document’s adoption not only by electoral practitioners but also by a broad spectrum of each country’s citizens.

The target audience for the Bangkok Declaration is all electoral stakeholders across Asia, particularly those directly involved, in whatever capacity, in elections.  At the same time, the Bangkok Declaration is written so that it is easily understandable by the public.  Despite the attempts to keep the document simple enough for the public to understand, all electoral practitioners can benefit from the document due to its unique scope and exceptional origin.

Funding for the Asian Electoral Stakeholder Forum in December was generously provided by the Peace Building Unit of the Belgian Federal Public Service Foreign Affairs.  The International Institute for Democracy and Electoral Assistance (International IDEA) graciously agreed to join with ANFREL as a co-host of the first AES Forum meeting in Bangkok and, in doing so, has provided helpful professional and technical guidance on many of the steps in the process.

Already, the Bangkok Declaration is being translated into several languages in order to make it more accessible to Asian peoples.  In addition, ANFREL is working in 2013 with its members to help with the implementation and assessment of the principles enshrined in the Declaration.  Such efforts will not, however, be confined to only those countries with representatives attending the first AES Forum but rather will expand to other countries as well.

In order to reinforce the efforts of each country and to build on the sense of common purpose, the second Asian Electoral Stakeholder Forum is being planned for late 2013/early 2014.  Such a follow-up meeting will allow civil society groups and EMB's to compare progress being made in each nation and to reinforce the importance of their work in enhancing the electoral processes across Asia.  It will also allow them to share strategies for the best ways of winning crucial support for implementation of the Declaration.  While no one expects quick success, participants at the 2012 AES Forum are optimistic that the Bangkok Declaration will, in fact, point the way to the evolution of electoral processes throughout Asia.