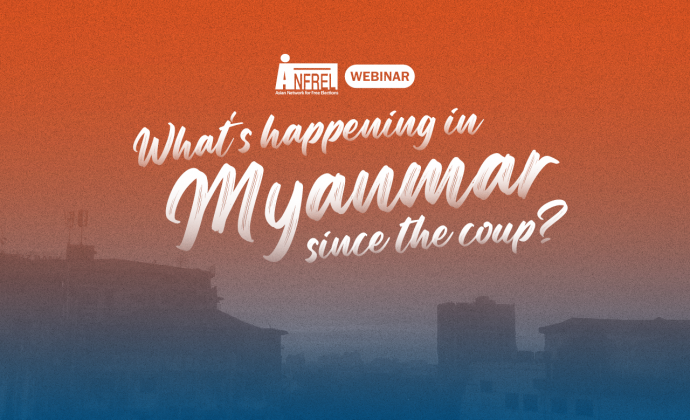 Described as a “fight to death” between a kobra and a mongoose, the struggle to topple the military junta and restore democracy in Myanmar have been relentless as people from different walks of life stage peaceful protest actions around the country.

The military junta, however, has responded to the peaceful protests with intimidation and violence arresting and detaining thousands and killing hundreds of people who dare defy military rule.

In a webinar ANFREL hosted on 24 March 2021 about what has been happening in Myanmar since the coup, Phil Robertson, Asia Division deputy director of Human Rights Watch, said human rights violations are recorded daily in Myanmar as the military police rapidly moved to use force even use snipers with the intent to shoot to kill peaceful protesters.

Meanwhile, Khin Ohmar, founder and chair of Progressive Voice, said the situation in Myanmar is both troubling and heartbreaking with at least 275 protesters and civilians recorded to have been killed and more than 2,800 have been either detained, arrested, or charged.

Having been part of the 1988 uprising in Myanmar, Khin Ohmar said the violence now is much more immense as who she called “savage barbarians” are enjoying the killings and the horrific crimes they are doing to the people of Myanmar.

Myanmar is in its current situation because the Myanmar military or the Tatmadaw refused to recognize the legitimacy of the results of the 2020 general elections alleging irregularities in the voter list, among other complaints.

ANFREL Executive Council Ex-officio Member Damaso Magbual said the Tatmadaw violated the election law when it did not observe due process in resolving issues and complaints related to the conduct of the elections.

Magbual said the burden of proof lies with the party that alleges fraud. For the Tatmadaw, before they were able to present any evidence to prove their claims about the 2020 polls, they chose to instead stage a coup.

He also said election observers and analysts distinguish the process from the result as the process may not be in keeping with the rules of the game but may produce results that are authentic and in the case of the 2020 polls in Myanmar, he said the results reflected the will of the people.

Khin Ohmar noted that the 2020 election results will always be with the people and that nobody could take it away which has been proven in the past seven weeks since the coup with the people's refusal to accept military rule.

She said the military has not been successful with their attempted coup as they have not gained full control. Civil servants have been key in the resistance with the Civil Disobedience Movement (CDM) which has effectively rendered the country ungovernable.

Response from the International Community

Robertson said the on-going crisis in Myanmar is a tug of war and that the big question now is how long can the people hold out with the military retaliation getting fiercer. He said the time is not on the side of the protester and that there has to be more actions from the international community to stop the killings and demand the restoration of democracy.

He said there is a wide gap between the expectations of the people in Myanmar and what the international community has been doing. While there has been a lot of strong statements of condemnation, the pressure has not been as tight and can be rooted from the hesitance of governments to act.

Khin Ohmar said the Association of Southeast Asian Nations (ASEAN), a regional bloc where Myanmar is a member, should get out of the box and abandon its non-interference policy.

She said the crisis in Myanmar is not an internal affair as it can impact neighboring countries. It is also a humanitarian crisis with the condition of millions of people, who lack basic needs because of the violence and conflict in the country, getting worse because of the current situation.

Khin Ohmar also said ASEAN must not get involved in the new election that the military junta is proposing to conduct. The junta placed the country under a state of emergency and have made pronouncements of conducting a fresh election after then promising to hand over power to the winners of that election.

Magbual cautioned that with the proposed new election would come a new set of rules written by the military which will be more stringent and even more difficult for various groups.

But how can ordinary people help?

Robertson also requested people to continue to show their support online by posting solidarity messages and let the people of Myanmar know that they are not alone in their fight.

Moving forward, Magbual said it is high time that the Myanmar constitution be rewritten to something that will serve the needs of the diverse communities in the country.

The current constitution, Robertson said, was written by the military for the military and adopted after a fraudulent referendum. It is used to subvert democracy from the beginning of its existence, he said.

Khin Ohmar said the people are calling for the absolute abolition of the current constitution and are currently drafting a people's constitution to establish a federal democratic union.

She said elected representatives from the 2020 elections are working with ethnic communities to draft the new constitution. She said with the wide support from different sectors and the recognition of the persecution of vulnerable groups like the Rohingya community, there is a huge chance now more than ever for inclusivity.

With the younger generation getting more involved in the movement, Khin Ohmar urged the youth to take stock and continue to fight for the people’s rights.

The webinar on the current situation in Myanmar is part of ANFREL’s continuous efforts to support and strengthen the people’s struggle for genuine and inclusive democracy and freedoms. ANFREL also has an on-going online campaign called “Project Amplify!” which aims to amplify diverse voices of support for and solidarity with the people of Myanmar.