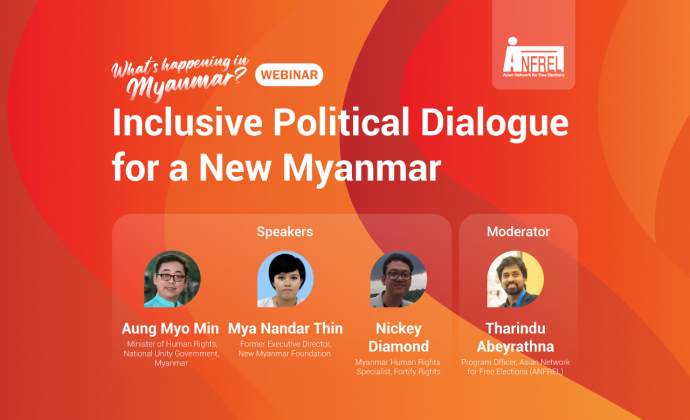 The Asian Network for Free Elections (ANFREL) is hosting a webinar about inclusive political dialogue for a new Myanmar on 22 June 2021, at 5:30 p.m. (Bangkok time).

From the protest actions in different parts of the country, the people of Myanmar are trying to regain freedom through their continuous resistance. Several months since the coup, the National Unity Government has since been established and the 2008 military-drafted constitution abolished.

The military, however, remains relentless in their pursuit to take control of the situation with the violent crackdown on people who express dissent. The military appointed Union Election Commission has also made pronouncements of dissolving the National League for Democracy.

ANFREL seeks to discuss, through this webinar, how the people of Myanmar are mapping out steps to regaining their freedoms and moving forward through inclusive political dialogue among different stakeholders amid the current situation.

The webinar will be hosted via online meeting platform Zoom and streamed live on ANFREL's Facebook page. To join, register here: https://bit.ly/2Ss20qf.

This webinar is part of ANFREL’s continuous efforts to support and strengthen the people’s struggle for genuine and inclusive democracy and freedoms. ANFREL also has an on-going online campaign called “Project Amplify!” which aims to amplify diverse voices of support for and solidarity with the people of Myanmar.