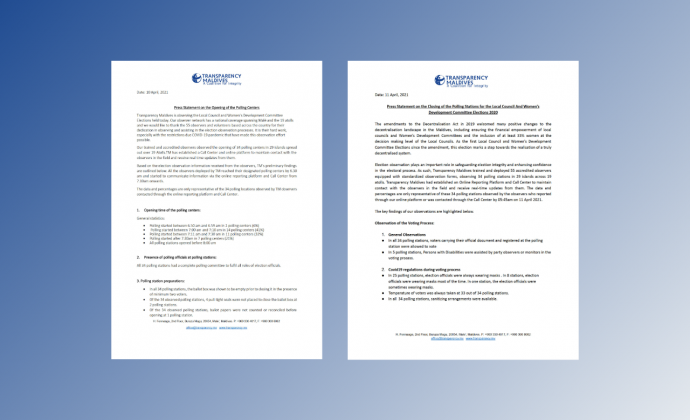 Posted by ANFREL With 0 Comment In Maldives, Network News

Transparency Maldives found in their observation of the Local Council and Women's Development Committee Elections on 10 April 2021 that the voting procedures were properly followed but COVID-19 risk mitigation strategies were not effectively enforced.

They said the voting procedures were properly followed and there were no issues raised at any of the 34 polling stations observed.

The COVID-19 risk mitigation strategies, however, was noted to have not been effectively enforces across polling stations. There was also inadequate coordination between the Health Protection Agency and the Elections Commission which led to dropping the proposed arrangements for quarantined and COVID-19 positive persons to vote separately on Election Day, leading to confusion among voters and polling officials.

TM the Local Council and Women's Development Committee Elections is the first since the amendment of the Decentralization Act in 2019 which it noted as "a step towards the realization of a truly decentralized system."

Read the statement of Transparency Maldives for the opening and closing of polling stations here: