Timor-Leste Goes to the Polls

Posted by admin@anfrel.org With 0 Comment In ANFREL News, Timor Leste

• Parliamentary Elections in the Democratic Republic of Timor-Leste are
scheduled for Saturday the 7th of July. The election will determine the
country’s members of parliament and, as a result, will eventually determine
the country’s next Prime Minister. The Secretariado Technico
Administrasaun be Elesaun (STAE) has completed it logistics deployment to
the far flung areas of the country for the election which is being conducted
under the watchful eyes of hundreds of foreign observers who’ve come to
the country to witness Saturday’s polls.
• Interest in the election was high and the people of Timor-Leste were widely
engaged to support the polls and ready to exercise their political rights at 630
Polling center across the country.
• 21 Political parties are listed on the ballot, though the Congresso Nacional
de Reconstrucao de Timor-Leste (CNRT), Frente Revolucionaria do Timor-
Leste Independente (Fretelin) and Partido Democratico (PD) are the parties
expected to be in a tight battle to win the elections.
• As referenced above, the elections have attracted the attention of
international elections observation missions, amongst them, the European
Union Election Observation Mission (EUEOM), Asian Regional Forum
(ARF), International Republican Institute (IRI), GPAC, African Observers,
CPLP and ANFREL are all in the country.
• There were no serious incidents of violence reported as of the 4th of July
2012. The peaceful environment will contribute to the smooth transition to a
new government and Prime Minister. Baucau, Bobonaro, Dili and Viqueque
are amongst the volatile districts under watch for violent outbreaks during
the post election period.
• Police backed by the Military are on alert and ready to respond in case of
violence.
• The elections have cost ~8 million USD, a total which has come from
various donors.
• UNMIT (United Nations Mission in Timor-Leste) with UNEST (Electoral
Support Team)are deploying UN volunteers across the country to support
CNE & STAE and smooth the election operation.
• ANFREL, together with its member in Timor Leste, is covering the elections
and will continue reporting.
Some basic Statistics:
- 645,624 eligible voters.
- 640 Polling centers in 13 Districts.
- Over 78,000 Fiscais (party Agents) accredited
- 652 International elections Observers Accredited 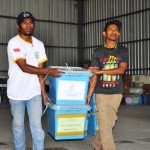