The Race for No.1 has begun: Candidates for Governor in Aceh Pledge for Peaceful Elections & ANFREL Observes in Aceh 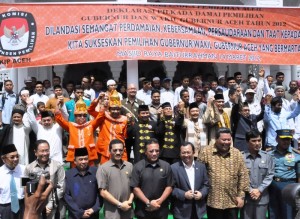 On 14 March 2012, five pairs of gubernatorial candidates in the Aceh Elections made pledges for a non-violent electoral race in the provincial capital, Banda Aceh.  The candidates also committed to respect people’s freedom to exercise their rights and to maintain order and peace as their top priority. The candidates also pledged their commitment to being “ready to win and ready to lose.” In addition to the gubernatorial race, Aceh will also hold 4 elections for mayor/vice mayor and 14 elections for head of regency/vice head of regency, which are being contested by 137 pairs of candidates across Aceh province.

The declaration was designed as a conflict prevention measure to calm possible violence in the election. It took place just before the campaign, which kicks off on 22 March and will last until 6 April 2012.

The 9 April poll is the second local election in the province since the peace agreement signed by the Free Aceh Movement (Gerakan Aceh Merdeka, GAM) and the Government of Indonesia (GoI) in 2005. Since then, local politics have been marked by ex-combatants occupying strategic political positions. Friction and conflict have colored the local political scene. In this gubernatorial race, there are two pairs of ex-combatants competing that could split the vote of ex-combatant supporters.

The Independent Election Commission in Aceh (KIP) initiated the event on Tuesday. Among the attendees to witness the ceremony were national officials such as Bambang E.C. Widodo (Chairman of Bawaslu), Hafiz Anshary (Chairman of General Election Committee), Airmarshal (ret) Djoko Suyanto (Coordinating Ministry of Political, Law and Security), Gamawan Fauzi (Home Minister), Prio Budi Santoso (Vice of Chairman of the House of Representatives) which arrived together with other 14 MPs, Timor Pradopo (National police chief), etc. They expressed their shared happiness that the election is finally being held and that they are proud of Aceh’s candidates for committing to hold peaceful elections.

ANFREL is deploying a total of 11 International election observers to Aceh province that will cover the East, West, and Central portions of the province to observe closely the conduct of the elections.