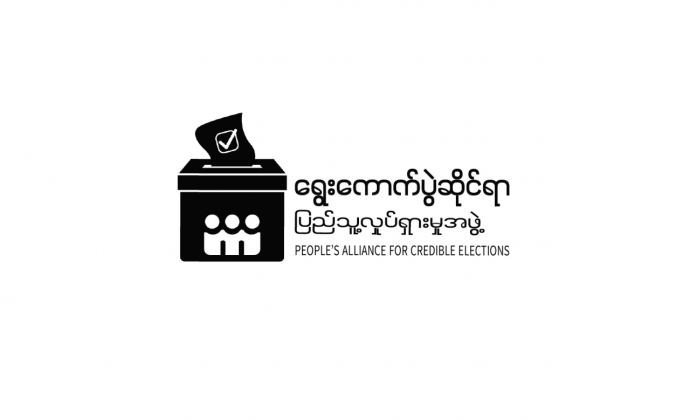 First published on the website of PACE on 24 August 2020.

The Union Election Commission stated that it will grant accreditation letter to PACE (People’s Alliance for Credible Elections) only after PACE has been registered under Association Registration Law, even though it stated earlier that accreditation for election observation in 2020 General Elections would be granted to PACE. The decision of the Commission not only limits citizens’ election observation rights through legal procedures, it also limits and regulates freedom of association and political participation, fundamental political rights of the citizens. Therefore, PACE urges the Union Election Commission to lift the current limitation and guarantee citizens’ rights of observation. Moreover, reforms of the electoral legal framework is essential to protect the political rights of citizens in the long run.

Even though PACE will continue its effort to be registered, it is unsure to get accreditation in time before elections due to the current limitations and procedures. The elections will be held in 75 days and election campaign period is commencing in about two weeks. The objective and comprehensive analysis and evaluation will not be attainable if observation can be conducted only on certain periods of elections instead of the whole process including pre-election, during-election, and post-election periods. Therefore, the decision to accredit PACE for election observation only after registration is permitted is unpractical for the participation of local civil society organizations (CSOs) and rather poses a hindrance to their election observations.

Citizens have the right not only to vote freely in elections but also to know the quality of the election process. Election observation of local CSOs is the exercise of citizens’ rights to election observation to observe whether their votes are secure or not and counted accurately or not. Even though there was no legal framework for election observation in the 2015 General Elections, to promote trust, and integrity of the elections essential procedures and regulations were developed to allow both international and domestic observers to observe the whole electoral process. The Commission should encourage the citizens’ observation even more during the Covid-19 pandemic when collaboration with political parties, media and CSOs is urgently needed for electoral stability and confidence in the electoral process and results. Instead, the decision of the Commission limits citizens’ rights that were enjoyed before.

On August 18, the Union Election Commission issued PACE a recommendation letter for association registration saying it would grant PACE the accreditation for election observation. PACE submitted the receipt of Form-5, which the Union Registry Board acknowledged the application for association registration to the Union Election Commission on the same day. The Union Election Commission sent a response dated August 21 stating, especially “[…] People’s Alliance for Credible Elections (PACE) is not an association registered under the Association Registration Law. Because it is not registered, according to Section 27 of Association Registration Law (2014), it will not be able to receive support from an international government, international non-governmental organization, local organization or an individual. […] election observation can be conducted by anyone. However, if PACE likes to conduct election observation by receiving support from international organizations, PACE will be granted accreditation letter only when it has applied for registration and submitted the registration permission.” 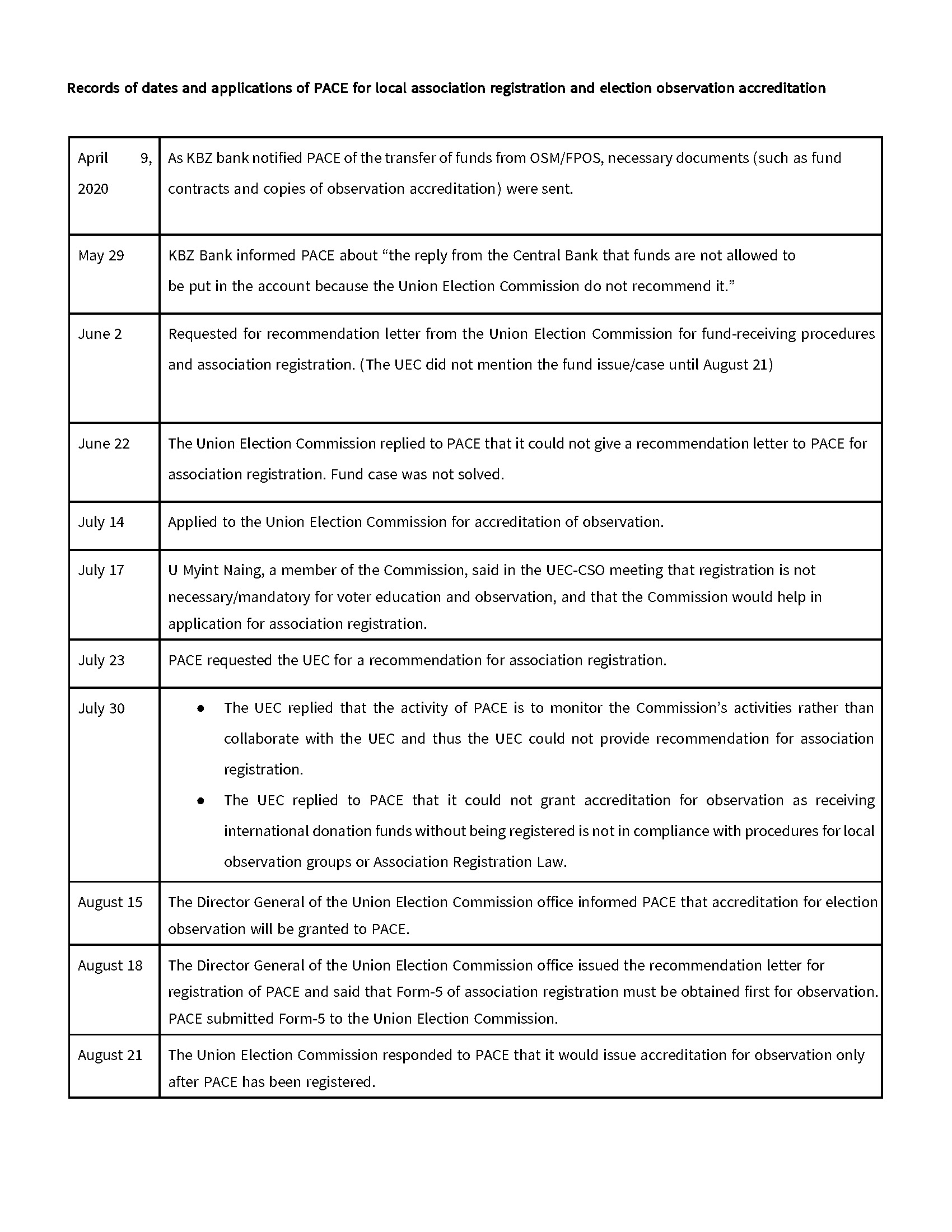 The People’s Alliance for Credible Elections (PACE) is an independent, non-partisan, and non-government domestic election observer organization. PACE was founded in 2014 to strengthen democratic institutions in Myanmar through safeguarding citizen rights and promoting public participation in the electoral processes. To promote transparency, accountability and inclusiveness in the electoral process, PACE mainly works on civic education, election observation, and electoral reform. Since the initial voter registration project in 2014, PACE has observed the 2015 General Elections with 2,500 observers nationwide, the 2017 By-elections with over 700 observers and the 2018 By-elections with over 700 observers. PACE also conducted observation/monitoring in Yangon City Development Committee Election in 2019 with over 350 observers. In addition to the election observation, PACE also conducted five opinion polls and other mini surveys nationwide during the 2015-2019 period. Moreover, we also conducted a survey on the citizens’ perspectives in the pre-election period in 2020 and will publish the findings in the coming weeks.