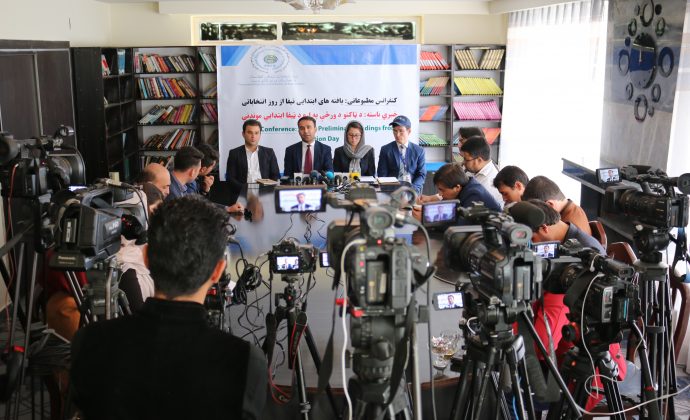 Summary of TEFA’s observation findings from the 2019 Presidential Election

The Transparent Election Foundation of Afghanistan (TEFA) considers the 2019 election an important milestone for consolidating Afghanistan’s democracy despite all its challenges and constraints, and declares the 2019 presidential election a successful democratic practice should the process be concluded with justifiable results backed by a clear distinction between the valid and invalid ballots.

Security has been a serious challenges for the 2019 Presidential election; however, despite the upsurge in security threats, Afghanistan’s security forces did leave no stone unturned for ensuring citizens’ safety and security to the optimum, which truly is a great achievement for our nation as whole.

Domestic observers have also played a momentous role in the 2019 election, their endeavor for observing the polls and giving wide coverage across the country without international observers is highly commendable, and their reports can be a strong source for shedding light on the end results of the 2019 election and for making a clear distinction between valid and valid ballots. Media on the other hand also made a great deal of contribution to the process by working incessantly to echo the ground realities of E-Day through different platforms and means for spreading awareness among the public.

Unfortunately, the process cannot only be defined with all such positivity; there have been weak points in the process among which the following points predominate: Lack of IEC’s operational preparation and procurement for E-Day, weak voters’ turnout, Biometric devices malfunctioned in some PCs, voters not being recognized by biometric server, discrepancy between digital and printed voter lists, Lack of coordination between IEC and its provincial offices on account of no telecommunication service, some PCs were not supplied with sensitive and insensitive election material, inadequate number of workers in PC especially in female polling stations, relocation of some PCs without coordinating with presidential tickets, Absence of voter list in some PCs, lack of a shared procedure for using biometric devices, IEC’s workers were not present on time in some polling centers, a certain number of voters could not cast their ballot due of lack of coordination among IEC, its provincial offices and polling centers across the country, security threats in some districts, a great number of polling centers were opened with delay, and absence of ECC’s representative in some polling centers.

TEFA conceives the 2019 Presidential election far better than the 2018 Parliamentary elections in all operational respects, and declares the roles of EMBs especially IEC tremendously productive and constructive.