Posted by Campaign and Advocacy With 0 Comment In Afghanistan, Network News 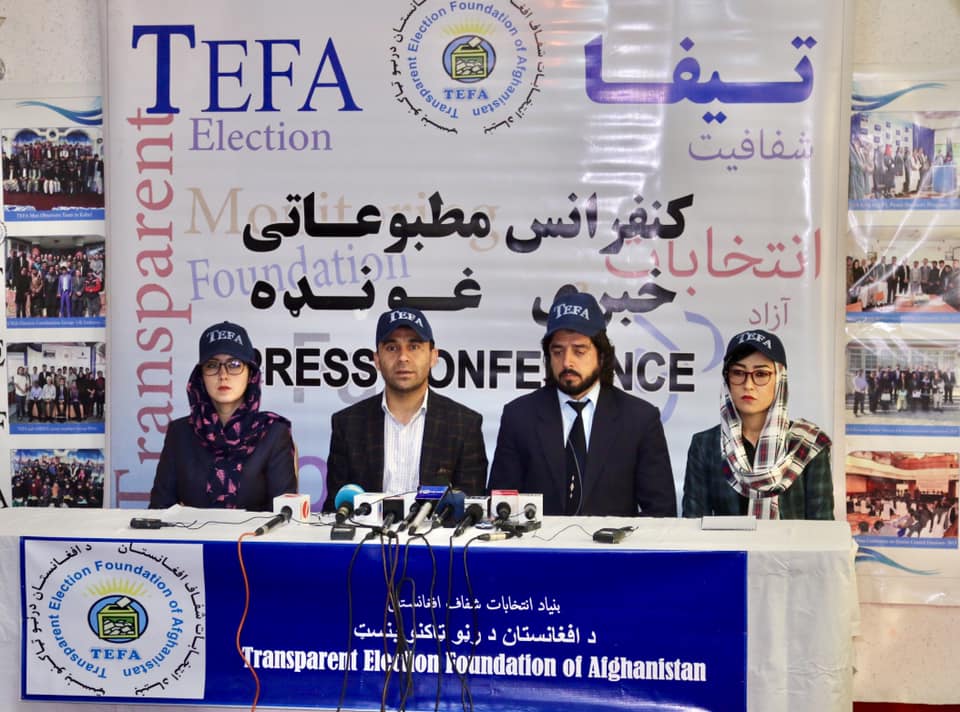 Kabul: professional, impartial and objective observation is deemed a substantial necessity for ensuring transparency in the upcoming elections, and can be the sole source of validating it. In spite of the all the daunting challenges ahead of the elections, TEFA is prideful of assigning 66 of its provincial coordinators, and deploying 7200 trained and volunteer observers in 33 provinces and exactly 397 districts of the country who will both professionally and impartially observe the elections for the sake of prevailing transparency.

Due to adverse security issues and challenges, approximately 300 of TEFA’s registered observers may likely not be able to observe the day of elections in 10 provinces of Afghanistan. Availability of sensitive and insensitive election material in all polling stations, use of biometric, security of E-day, women’s participations, interventions made by government officials, candidates’ high expectations, absence of international election observers, and management of election day as whole are some of the major eye-catching concerns, because of which, TEFA strongly believes that this very electoral process is severely in need of accurate, professional and impartial observation which can be made possible by election oversight body and the public at large.

Other concerns pertain to the agents and observers assigned by political parties and candidates, as they might enforce voters to cast their ballots in favor of any particular candidate of their choice. IEC must and other concerned electoral entities must embark initiatives for neutralizing such intended acts. In order to avoid frauds and misconducts of any sort on the day of elections, TEFA requests global community to personally observe ballot counting process at IEC. Knowing that the campaign period officially came to an end just last night, Transparent Election Foundation of Afghanistan, requests all the respect worthy candidates who have the tendency to promote rule of law in the country, to comply with all the defined rules and regulations for the “Reticence Phase” and allow voters to make up their minds free of all sorts of emotional and/or physical reinforcements.

TEFA as a domestic observer foundation, encourages all eligible votes for the sake of actualizing the fundamental of democracy especially elections, to attend their designated polling stations, employ their political rights and vote for such candidate whose claims and motto are truly for the wellbeing of the nation while disregarding their demographics.

TEFA, as a domestic observer foundation has professionally observed the parliamentary campaign period in 33 provinces of Afghanistan by deploying 165 trained observers, whereby the observers minimally observed 3 gatherings of candidates on daily basis, and reported their observation process through the checklists they were provided with by TEFA’s head office.
TEFA’s main findings are described in the following:

2. Security threats in campaign period: candidates and citizens were threatened security wise during the campaign period in 18 provinces of Afghanistan, of which we can mention threats pertaining to masked and armed men over night in Balkh province, insecurities in most of the districts of Nooristan and Farah which made it impossible for candidates to carry out their campaigns, reception of threatening letters from Taliban in areas which are controlled by them, blasts situated in candidates’ gathering in Helmand provinces which caused the death of one candidate and 8 civilians, assassination of a candidate in Kandahar, people being enforced to cast their ballot for a particular candidate, emergence of psychological war and intentional intensification of bad security conditions and cultivation of fear in people by Taliban and ISIS in 12 provinces of Afghanistan.

3. High campaign expenditures: as per TEFA’ findings, in 9 provinces of Afghanistan, over 108 candidates have exceeded the defined limit of campaign expenditure, where much of this expenditure attributes to disbursement of cash to potential voters, TV commercials with leading media outlets, serving food for people in public gatherings, gifting clothes and scratch cards, and having 400-500 vehicles in their head offices.

4. Disturbing peace in the society and creating problems for citizens: in all 33 provinces, candidates misfortunately created problems for citizens and disturbed peace in their communities, for instance, blocking main roads in Badakhshan province by a candidate, sticking pictures on government and private properties without their permission, not to mention use of glue for placing their posters which is a direct violation of the campaign procedure, damaging bill board poles, formation of sound barriers, demeaning beauty of cities with posters being placed in unwanted areas, and placement of posters on traffic signs.

5. Lack of awareness from campaign procedures: in 25 provinces of Afghanistan, about 55% of the candidates have no idea about the campaign procedures; neither them or their team had considered that such lack of awareness can be the root cause of campaign violations; and even in most cases governmental names, symbols and figures have been used and shown in their Advertisements.

7. Unethical competition among candidates: In 33 provinces of Afghanistan, unethical competition existed among candidates which is against the defined procedures and code of conduct. Such competitions include publication of false advertisements by one candidate in opposition of another, destroying each other’s campaign or advertisement material, portraying each other badly through false descriptions in public meetings, false competition in social media especially Facebook, embracing tribal and language issues and differences for arousing peoples’ emotions against one another.

9. In spite of all the mentioned issues, media outlets which are apparently supposed to act impartially, we screwed towards their desired candidates, in provinces such as Balkh, and covered them comparatively better in their commercials and infomercials.

10. There are many more pressing issue that were going on during the campaign; for instance a candidate who had been imprisoned for 3 years, had his supporters campaigning for him outside until he was exposed and put-off his candidature. Or expression of will by candidates in Wardak province already on signing an agreement with Taliban.

11. Over 70% of candidates’ campaign teams had no proper structure or hierarchy in terms of having Finance Manager, Campaign Manager, coordinator, Event Manager or liaison officer. And over 70% of the candidates had no strategic plan in addition to not having any specific or defined objectives for their delegation in future Parliament, and most of them had mistaken Mottos with for plans and so did not have a objective-based campaign.

12. Lack of a proper observation mechanism in IEC for observing the campaign activities and expenditure made by them are among the challenges which have added to the volume of violations and fraud in this period.

Transparent Election Foundation of Afghanistan is an independent election oversight body, which operates in fields of public awareness, electoral reforms, advocacy and professional and impartial observation from different phases of elections, so to promote and consolidate the effective role of Civil Society Organizations. TEFA has successfully observed the previous presidential, parliamentary and provincial councils elections and had its part in ensuring transparency and legitimacy of democratic processes in the country. TEFA executes all its activities under the imposed law of the country and in direct coordination with electoral organization.