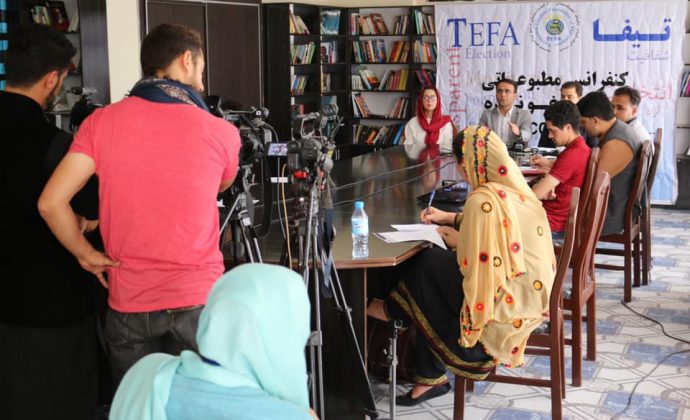 KABUL -- With only 1 day remaining for the 2019 Presidential election, Transparent Election Foundation of Afghanistan (TEFA) through this press release explicitly announces its observation from the 2019 E-Day, shares its findings from the campaign period, and presents its concerns and requests on/to the general public, electoral tickets, and election management bodies.

TEFA as a domestic election watchdog will deploy 5,200 observers in 34 provinces of Afghanistan who are trained to observe with thorough professionalism, impartiality, and independency. This observation mission is charged with a full-fledged Call Center which will capture real-time information from observers across the country to be entered into TEFA’s database, based on which 3 distinguished statements on the Poll opening, voting, and Ballot Counting phase will be released. Moreover, after assembling the result sheets from across the country, TEFA -a few days after the election-will announce the possible results of the 2019 election.

According to TEFA’s observation findings, in the past 2 months, campaigns have had serious challenges and problems. Poor presidential campaigns especially around its first month, campaigns being limited to capital cities only, excessive use of money during campaign period by some of the presidential tickets, use of state resources by two of the presidential tickets, lack of proper and well-designed plans among presidential tickets, atmosphere of mistrust and elections being blurred by the peace talks, upsurge in security threads, interventions of provincial and local authorities in EMBs’ operations, violation of electoral conventions, agreements, rules and regulations by a certain number of candidates e.g. exploiting children in events and gatherings, use of glue for placing posters on walls, violating peaceful atmosphere of the society, misuse of citizens’ emotions, and placing posters on private properties without seeking permission), defrauding voters, presenting deceptive promises, inequalities in providing peaceful and secure environment for all presidential tickets, IEC’s inability to openly report on candidates financials and inability to address election violations and fraud, are among the serious challenges and problems of the campaign period.

With years of electoral experience and a vigilant analysis of EMBs and security authorities’ operations, TEFA presents the following concerns:

1. Concerns over irregularities and planned violations in E-Day
2. Keeping voters list in the dark and advertently sabotaging E-Day
3. Inadequate number of female staff in female polling stations in 34 provinces of Afghanistan and lack of women’s greater turnout in E-Day.
4. Lack of awareness among citizens on the use of biometric devices.
5. Vast majority of local authorities working in favor of particular candidate.
6. Security threads keeping a great number of polling centers closed.
7. IEC providing unrealistic and bias statistics about the number of open and closed polling centers in different zones.
8. Serious discrepancy between the number of registered voters and the overall population.
9. Ambiguities about the full-functionality of the biometric devices.
10. Poor interest of international organizations for the process and absence of international observers in EMBs
11. Lack of cellular connectivity and lack of coordination among election stakeholders especially between IEC and ECC.

TEFA deems the 2019 presidential election a key and important milestone for electing a new president, and for institutionalizing democracy, national and international legitimacy, and restoring people’s trust in the process and democracy in general, requests the general public, EMBs, and presidential tickets to:

• Citizens should participate in the coming election as alert voters and should cast their ballots favor of their desired candidates.
• Citizens should take part in the process as observers and should prevent irregularities, rumors, and violations.
• Presidential tickets should act in accordance with the law, and should never ever attempt on anything at the expense of citizens’ will and the process.
• Presidential tickets should avoid all sorts of disputes and conflicts with each other and should refrain from interventions in EMBs work on E-Day.
• Candidates should avoid using elections as a tool for creating a political crisis.