Members of an international election observation team on Tuesday urged Taiwan to increase the pace of electoral reform to ensure fairer and freer elections.

"There should be limits to the budget that can be used for campaigning," said Sakool Zuesongdham, a member of the Asian Network for Free Elections.

Zuesongdham said that though Taiwanese electoral law caps presidential election campaign expenditures at around NT$424 million (US$14.16 million), it does not punish candidates for exceeding that amount.

"This is one of the concerns that we still see. There are a lot of gaps between big parties and small parties," Zuesongdham said, adding that small political parties in Taiwan have few opportunities for media exposure.

The observation team, comprising members of various Asian democracies — including Japan, Indonesia, Thailand and South Korea — arrived in Taiwan on Jan. 8 to observe the country's Jan. 14 legislative and presidential elections. The group is scheduled to hold a press conference to announce its observations after the elections are completed. The team observed Taiwan's presidential elections in 2004 and again in 2008.

Taiwan's Central Election Commission should ensure the objectivity of the media and work more closely with local non-governmental organizations on election monitoring, said Zuesongdham. "If the (commission) just does administrative tasks, that's not enough for a free, fair and transparent election," he said.

Johny Barliyanta, another member of the team, said that Taiwan "needs an electoral justice system to confirm and ensure everybody that the results are accountable." Barliyanta said he has noticed "growing anxiety" among voters over the results of the election.

The team's mission director, Ichal Supriadi, also called on the government to be more open to international observers. He said that while the election commission has welcomed and briefed the team in past elections, the team hasn't received any response this year.

Despite the areas for improvements, Zuesongdham said that voters are very eager to support their political parties, a "good sign for Taiwan." 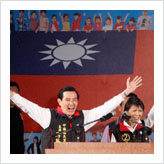