Sri Lanka Presidential Election 2015: “A Triumph of the People”

SRI LANKA PRESIDENTIAL ELECTION 2015: “A TRIUMPH OF THE PEOPLE”

The Asian Network for Free Elections (ANFREL) congratulates the people of the Democratic Socialist Republic of Sri Lanka for their commitment to strengthen democracy by participating in the Presidential Election. ANFREL, an independent network of Asian Election Observers, also wishes to commend the Department of Elections for showing professionalism and commitment in administering the election while maintaining transparency, accountability, and fairness despite the challenges and limitations it faced. ANFREL would also like to express its appreciation to the national monitoring organizations for their work to uphold  the sanctity of the votes. The joint efforts of all stakeholders fostered an environment conducive to the strong voter turnout witnessed on 08 January.

After analysing the reports of our 35 international election observers deployed across the country, ANFREL is confident that the January 8th 2015 election was held in a largely peaceful manner. ANFREL observers witnessed a smooth and transparent polling and counting process with only isolated irregularities and violence. However, ANFREL remains concerned in respect to the principles of fairness and free and fair elections, in particular, in regard to the misuse and abuse of state resources and  the absence of a  level playing field among contending parties.

ANFREL observed several incidents of misuse of public property such as the use of public buses to transport people to campaign rallies. Similar concerns have been highlighted by national monitoring groups that contend that public funds and the government bureaucracy are misused to serve as campaign machinery. Furthermore, unequal access to media has also been observed with the ruling party receiving disproportionate air time on both public and private channels.

An environment of fear has also been felt in different provinces including Eastern, North Western, and  Northern provinces where voters have shown some hesitance in expressing their opinion about the electoral process. Vandalism of party offices and private property as well as assaults on party workers and supporters have become serious concerns. ANFREL observed an atmosphere of intimidation against civil society members which must be condemned. All such incidents should  be investigated and perpetrators should be prosecuted equally according to existing Sri Lankan law.

Since its deployment, ANFREL has worked in 24 districts in Sri Lanka, assessing (219), (250) subdivision villages and visited, and/or interviewed more than (500) electoral stakeholders including election officials, five presidential candidates (including representatives of the incumbent candidate, the Secretary General of the SLFP, 6 Ministers and senior ministers); and the opposition’s common candidate, Elections Monitoring Groups, Government officials, Civil Society Organizations, religious leaders, members of the academe, community leaders, the youth, and women’s groups. The mission maintains balance in the composition of its interviewees. During the polling day, the mission observed 213 Polling Center and 316 polling station (booth) as well as monitored counting process at 24 counting center during the 8th and 9th January 2015.

ANFREL election observers will continue to monitor the post-election environment in Sri Lanka and wish to see a peaceful conclusion of the election.

A Triumph of the People

The Rules of the Game 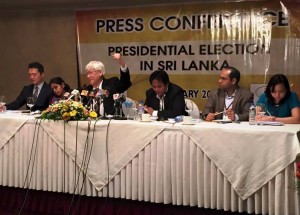