Special Coverage: Empowering Women in Timor-Leste Politics: The Role of the Women Caucus for Politic in Timor Leste

Posted by admin@anfrel.org With 0 Comment In Network News, Timor Leste

Empowering Women in Timor-Leste Politics: The Role of the Women Caucus for Politic in Timor Leste[1]

The recent parliamentary elections in the Republic Democratic of Timor Leste which were held on 7 July 2012 highlighted outstanding result on the number of women elected in the national parliament. 24 women are confirmed seated in the national parliament out of 65 total MPs. This marks a tremendous increase in the number of women, which makes Timor-Leste the first country in Asia to obtain over 35% women in the parliament.[2] Thanks to the electoral system that forced political parties to compulsorily include one female candidate out of every three set candidates in the closed-list Proportional system. This change was partially the product of tireless efforts by civil society throughout the years to campaign and lobby for additional rights. 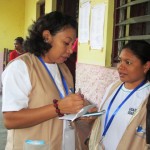 The Women Caucus for Politic (WCP) in Timor Leste is one of the CSOs whose work helped shape and improve the situation through three major activities. WCP has simultaneously lobbied to secure a female candidate quota in the E-law, prepared women candidates to compete in the elections and sensitized the media to increase coverage of womens’ campaign. The WCP has actively lobbied women MPs from multiple political parties to stand and convince the male MP colleagues to support the draft bill and get the government’s approval. They proposed that one female candidate be compulsorily included in every set of 3 candidates in the closed-list, a change which ensures higher female participation from the previous compulsory requirement to put one female candidate in every set of 4 candidates. After long debate and opposition by many parties, the bill was eventually approved by a majority of parliament and went into effect on the 3rd of May 2012, just prior to the election.

The WCP also engaged closely with all female MPs across political parties and conducted workshops, trainings, brainstorming sessions and other related activities to strengthen them. The WCP, in collaboration with KPI (Koalisi Perempuan Indonesia), in mid-may 2012 had delivered leadership transformative trainings for female candidates from 19 out of the 21 political parties who are registered in the elections. That same month, the WCP also conducted a Public Speaking & Technical campaign for female candidates which was attended by 50 candidates.

They brought all qualified female candidates to Bali for the activity which was supported by Kemitraan and involved a leading female NGO—Empowerment from Malaysia. The WCP also received support from the Australian Labour Party, to conduct a training on Campaign Management for female candidates at the end of May 2012.

The WCP also increased the cooperation of the media to be more gender sensitive in covering the campaign, giving fairer coverage to women in their news spots. In collaboration with the Center for Popular Empowerment, an NGO from the Philippines, a training was held in May 2012 to ensure a level media playing field for female candidates.

The WCP also cooperated with STAE (the Technical Secretariat for Electoral Administration) to print civic education/voter education flyers worth over 10,000USD to distribute to all corners of the country to encourage women to vote for women.

These are just a few programs that we have accomplished during 2012 and our mentioning of them is to explain how they’re part of the long path traveled to reach the recent achievement. We are also heavily involved with the electoral administration reforms that shaped the recent elections, which were “smoothly executed in the eyes of over 600 foreign observers from Asia, Europe, Australia, Africa and North America,” said Paula Cortereal Araujo, Program Manager of WCP, who served in an international election observation with ANFREL in 2007 in Thailand.

“Currently, WCP is involved in the regional Asean womens’ caucus together with its counterparts in the Philippines, Malaysia and Indonesia under the IKAT Program supported by Kemitraan-USAID,” said Ms. Pereira Da Silva. “But we are not yet satisfied with the status quo, we would like to see more women in future elections, not caused by quotas, but through fair competition, with women nationwide determined to do that. We also would like to see real involvement of women in governmental posts. This election, we invited ANFREL to attend the election occasion, even with our limited self-funding budget, in order to get assistance and consideration from ANFREL for strategy and potential cooperation with regional and international stakeholders,” added Julieta Pereira Da Silva, Executive Director of WCP.

[1]  The Timor Leste stakeholders known the Feto iha Politica (in tetum language) or Women Caucus in Politic (WCP) is a CSO in Republic Democratic of Timor Leste, established since 2001 to promoted rights and equality for women in politic and all levels of the decision making structure in the country. The WCP was accepted as an ANFREL Foundation member in 2008.

[2] The figure is a slight increase from previous periods where women held 21 out of 65, or 32.2 %, of National parliament seats.