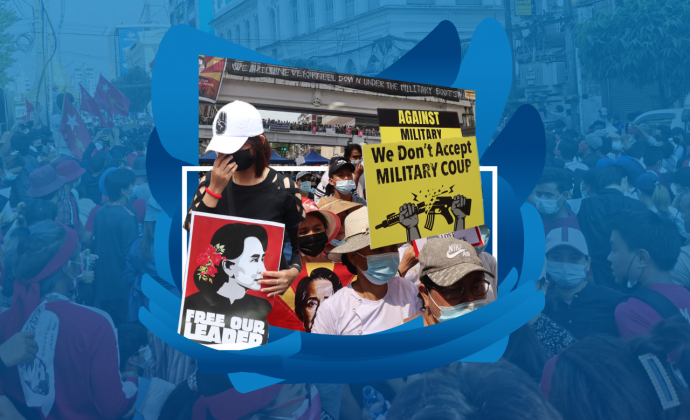 Six Months after Myanmar Coup: A Summary of the Junta’s Continuous Attempts to Undermine Electoral Democracy

The Myanmar military, or Tatmadaw, staged a military coup on 1 February 2021, just before the new parliament elected through the 2020 General Elections was to convene. The coup triggered mass nationwide protests and a civil disobedience movement, causing over 900 people being killed and thousands being detained to date.

On the first day of the coup, the junta announced there would be fresh elections at the end of a one-year state of emergency, in which the winning party would be allowed to form a government. However, the junta said in June that it would take two years to hold new elections and then moved the goalpost again to August 2023.

In the meantime, the junta has been planning an overhaul of the electoral system. It has also been consistently claiming massive fraud during the 2020 elections to justify the coup, and officially annulled the election results at the end of July. We see these actions as complementary facets of the junta’s continuous attempts to undermine electoral democracy in Myanmar and instead pave the way for long-term military rule.

The following are the key attacks on democratic elections by the junta since the coup.

1. Detention of election officials and the appointment of an alternate UEC

Following the coup on 1 February, the junta detained Union Election Commission (UEC) Chair U Hla Thein and over 150 election officials at state/region and township levels across the country according to the statistics from the Assistant Association for Political Prisoners (AAPP)1. While most of them have been released, the UEC Chair and 19 election officials remain in detention without charge as of 30 July.

The junta also illegally appointed an alternate UEC under the leadership of U Thein Soe, who used to be the UEC Chairman during the controversial 2010 General Elections.

The junta-appointed UEC has called for two meetings with Myanmar’s political parties since the coup. 53 parties attended the first meeting on 26 February and 62 attended the second one on 21 May. Major political parties such as NLD and SNLD boycotted both meetings, while the Arakan National Party (ANP) and the Kachin State People Party (KSPP) for instance went to the first meeting but refused to attend the second one. The junta-appointed UEC also revealed its plan to conduct meetings with political parties quarterly and the next meeting will be held in August.

In the second meeting, the junta’s UEC mentioned the possible dissolution of the NLD and revealed that more “investigations” are being conducted with regard to foreign funding of political parties. This could be used as a tool to ban the NLD and other pro-democracy parties from running in future elections.

The junta-appointed UEC called for suggestions from political parties to revise Myanmar’s first-past-the-post (FPTP) electoral system to proportional representation (PR). As of July, it said it has received 18 proposals from political parties. The UEC has also been releasing articles introducing PR in other countries, such as Japan, Indonesia, South Korea and Thailand, through its Facebook page.

It is doubtless that the military is now supporting PR in the hope to reduce the domination of the National League for Democracy (NLD) over national politics. While the UEC’s suggestion for the new electoral system remains unknown, the use of a PR system on top of the 25% seat quota for the military in parliament would further weaken the already undemocratic electoral system in Myanmar.

4. Voter fraud claims by the junta

The junta used alleged election fraud as the main justification for the coup and has continued to claim widespread errors in the voter lists used for the 2020 general elections.

To date, the junta has yet to put forward any evidence that would support these allegations. The investigations were conducted by the junta-appointed UEC without transparency as political parties and election observers were not invited to participate.

5. Annulment of the 2020 General Elections results

On 26 July, the junta-appointed UEC officially revoked the results of the 2020 General Elections, claiming that the elections were not free and fair and were not in compliance with the constitution and election laws. The announcement came after months-long “investigations” of voter lists and ballot papers by the junta-appointed UEC.

Other than the claim of 11.3 million voter list irregularities mentioned above, the reasons given by the junta-appointed UEC to annul the election results also include allowing voters who do not have national registration cards to cast their ballot by presenting their voter IDs and the presence of NLD members during house-to-house advance voting. However, Myanmar election laws do not require voters to have a national registration card to vote as practised in the 2015, 2017 and 2018 elections. The presence of party agents during house-to-house advance voting is also a normal practice, and agents from parties other than the NLD were also involved in observing the advance voting process.

The junta-appointed UEC also used several accusations against the NLD to justify the annulment of election results, such as interfering in the appointment of state/regional UEC chair and misusing its administrative power in the election and campaigning process to “grab the State power”. Such complaints and disputes should be addressed in election tribunals formed in accordance with Myanmar’s election laws. The blanket annulment of all election results after launching a coup is not just illegal and illegitimate, it is also a blatant disregard to democracy in Myanmar.