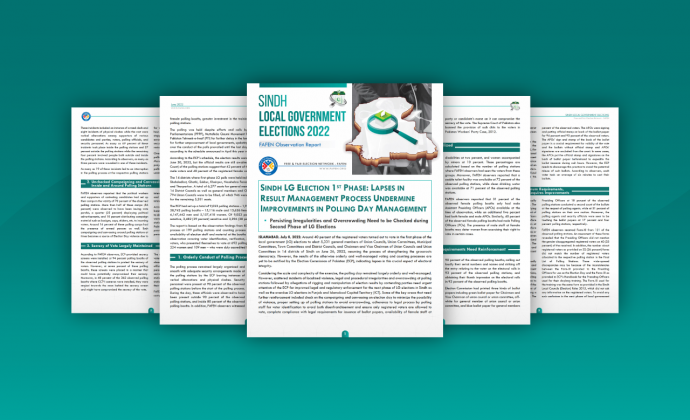 ISLAMABAD, July 8, 2022: Around 40 percent of the registered voters turned out to vote in the first phase of the local government (LG) elections to elect 5,331 general members of Union Councils, Union Committees, Municipal Committees, Town Committees and District Councils, and Chairmen and Vice Chairmen of Union Councils and Union Committees in 14 districts of Sindh on June 26, 2022, resuming the process of strengthening the grassroots democracy. However, the results of the otherwise orderly and well-managed voting and counting processes are yet to be notified by the Election Commission of Pakistan (ECP), indicating lapses in this crucial aspect of electoral integrity.

Considering the scale and complexity of the exercise, the polling day remained largely orderly and well-managed. However, scattered incidents of localized violence, legal and procedural irregularities and overcrowding at polling stations followed by allegations of rigging and manipulation of election results by contending parties need urgent attention of the ECP for improved legal and regulatory enforcement for the next phase of LG elections in Sindh as well as the overdue LG elections in Punjab and Islamabad Capital Territory (ICT). Some of the key areas that need further reinforcement included check on the campaigning and canvassing on election day to minimize the possibility of violence, proper setting up of polling stations to avoid overcrowding, adherence to legal process by polling staff for voter identification to avoid both disenfranchisement and ensure only registered voters are allowed to vote, complete compliance with legal requirements for issuance of ballot papers, availability of female staff at female polling booths, greater investment in the training of polling staff, and provision of basic facilities at the polling stations.

The polling was held despite efforts and calls by all major parties including Pakistan Peoples Party Parliamentarians (PPPP), Muttahida Qaumi Movement Pakistan (MQMP), Grand Democratic Alliance (GDA) and Pakistan Tehreek-e-Insaf (PTI) for further delay in the long-overdue LG elections on various pretexts including need for further empowerment of local governments, updating electoral rolls and issues of delimitation. The uncertainty over the conduct of the polls prevailed until the last day. However, Election Commission’s resolve to hold the polls according to the schedule announced in April this year remained undeterred.

The 14 districts where first-phase LG polls were held included Jacobabad, Kashmore, Shikarpur, Larkana, Kamber Shahdadkot, Ghotki, Sukkur, Khairpur, Naushahro Feroze, Shaheed Benazirabad, Sanghar, Mirpurkhas, Umerkot and Tharparkar. A total of 6,277 seats for general members of 101 Town Committees, 23 Municipal Committees, 14 District Councils as well as general members and Chairmen and Vice Chairmen of 93 Union Committees and 794 Union Councils were to be filled, of which 946 were decided uncontested while 21,298 candidates contested for the remaining 5,331 seats.

The report is based on the observation findings from 831 polling stations, which included observation of opening process at 199 polling stations and counting process at 180. Moreover, a general observation covering the availability of election staff and material at the booths was carried out at 1,959 polling booths, while a detailed observation covering voter identification, verification, and ballot issuance processes was conducted for 2,475 voters, who presented themselves to vote at 692 polling booths. FAFEN deployed 333 trained citizen observers – 224 women and 109 men – who were duly accredited by the ECP.