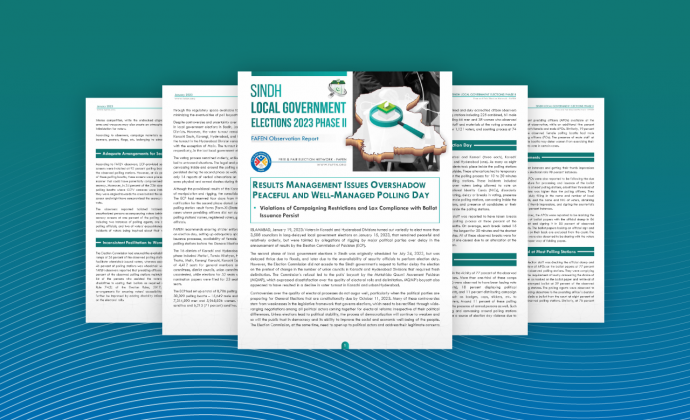 ISLAMABAD, January 19, 2023: Voters in Karachi and Hyderabad Divisions turned out variedly to elect more than 3,508 councilors in long-delayed local government elections on January 15, 2023, that remained peaceful and relatively orderly, but were tainted by allegations of rigging by major political parties over delay in the announcement of results by the Election Commission of Pakistan (ECP).

The second phase of local government elections in Sindh was originally scheduled for July 24, 2022, but was delayed thrice due to floods, and later due to the unavailability of security officials to perform election duty. However, the Election Commission did not accede to the Sindh government’s request to further delay the election on the pretext of change in the number of union councils in Karachi and Hyderabad Divisions that required fresh delimitation. The Commission’s refusal led to the polls’ boycott by the Muttahida Qaumi Movement Pakistan (MQMP), which expressed dissatisfaction over the quality of electoral rolls and delimitation. MQMP’s boycott also appeared to have resulted in a decline in voter turnout in Karachi and urban Hyderabad.

Controversies over the quality of electoral processes do not augur well, particularly when the political parties are preparing for General Elections that are constitutionally due by October 11, 2023. Many of these controversies stem from weaknesses in the legislative framework that governs elections, which need to be rectified through wide-ranging negotiations among all political actors coming together for electoral reforms irrespective of their political differences. Unless elections lead to political stability, the process of democratization will continue to weaken and so will the public trust in democracy and its ability to improve the social and economic well-being of the people. The Election Commission, at the same time, need to open up to political actors and address their legitimate concerns through the regulatory space available to it under the Elections Act, 2017, to ensure truly “inclusive” elections, minimizing the eventualities of poll boycotts by major political parties in future.

Despite controversies and uncertainty over the conduct of elections, an impressive number of people turned to vote in local government elections in Badin, Jamshoro, Tando Muhammad Khan, Tando Allah Yar, Thatta, and Malir Districts. However, the voter turnout remained relatively lower in Karachi Central, Karachi East, Karachi West, Karachi South, Korangi, Hyderabad, and Kemari Districts. According to Free and Fair Election Network (FAFEN), the turnout in the Hyderabad Division remained more than 40 percent, while in Karachi it was less than 20 percent with the exception of Malir. The turnout in Karachi and Hyderabad Divisions remained at 36 and 58 percent, respectively, in the last local government elections held in 2015.

The voting process remained orderly, unlike the previous phase when instances of overcrowding at polling stations led to untoward situations. The legal and procedural irregularities and inadequacies concerning campaigning and canvassing inside and around the polling stations and the ballot issuance process observed during the first phase persisted during the second phase as well. The election day environment was largely peaceful as FAFEN received only 14 reports of verbal altercations on January 15, 2023, as compared to 55 incidents of violence including some physical and armed clashes during the first phase.

Although the provisional results of the Karachi Division were publicly available within two days amidst allegations of manipulation and rigging, the consolidated results of the districts in the Hyderabad Division are still awaited. The ECP had reserved four days from the polling day for consolidation of the election results in its original notification for the second phase dated June 10, 2022. FAFEN observers noted omissions and inadequacies in the polling station result forms [Form-XI (Statement of the Count)] recurring during the second phase. They reported cases where presiding officers did not duly fill out the result forms leaving empty sections made for recording polling stations’ names, registered voters, gender-disaggregated number of votes polled, and signatures of polling officials.

FAFEN recommends ensuring stricter enforcement of the code of conduct regarding campaigning and canvassing on election day, setting up adequately spaced polling booths, compliance with the voter identification and ballot issuance processes, availability of female staff at female polling booths, and provision of basic facilities at the polling stations before the General Elections to improve the polling day management.

The 16 districts of Karachi and Hyderabad divisions where local government polls were held during the second phase included Matiari, Tando Allahyar, Hyderabad, Tando Muhammad Khan, Jamshoro, Dadu, Badin, Sujawal, Thatta, Malir, Korangi Karachi, Karachi East, Karachi South, Karachi West, Karachi Central, and Kemari. A total of 4,412 seats for general members and/or Chairmen and Vice Chairmen of municipal committees, town committees, district councils, union committees, and union councils were to be filled, of which 862 were decided uncontested, while elections for 52 seats were postponed due to death of contesting candidates. In addition, no nomination papers were filed for 23 seats. As many as 18,108 candidates contested for the remaining 3,508 seats.