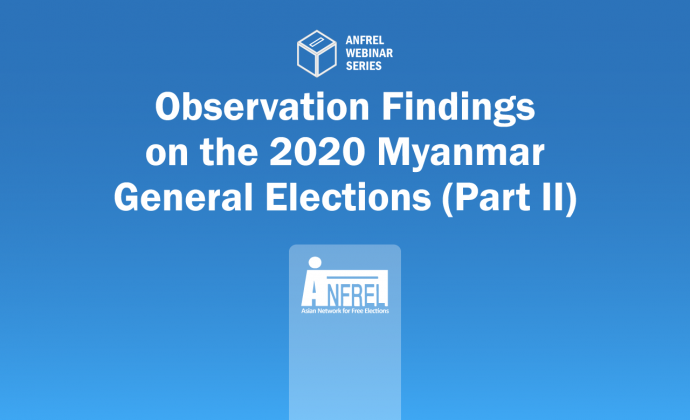 Several election observer groups during a webinar ANFREL hosted on 21 December 2020 said that while there have been observed changes in the electoral process, more reforms and improvements are still needed to sustain electoral democracy in Myanmar.

PACE said they did not observe any deliberate attempt to compromise the electoral process and weakness in polling stations did not overwhelmingly change the process. The weak points in this election, however, were on the election-related rules and laws. PACE said there were questions on the composition and appointment of officials in the UEC. 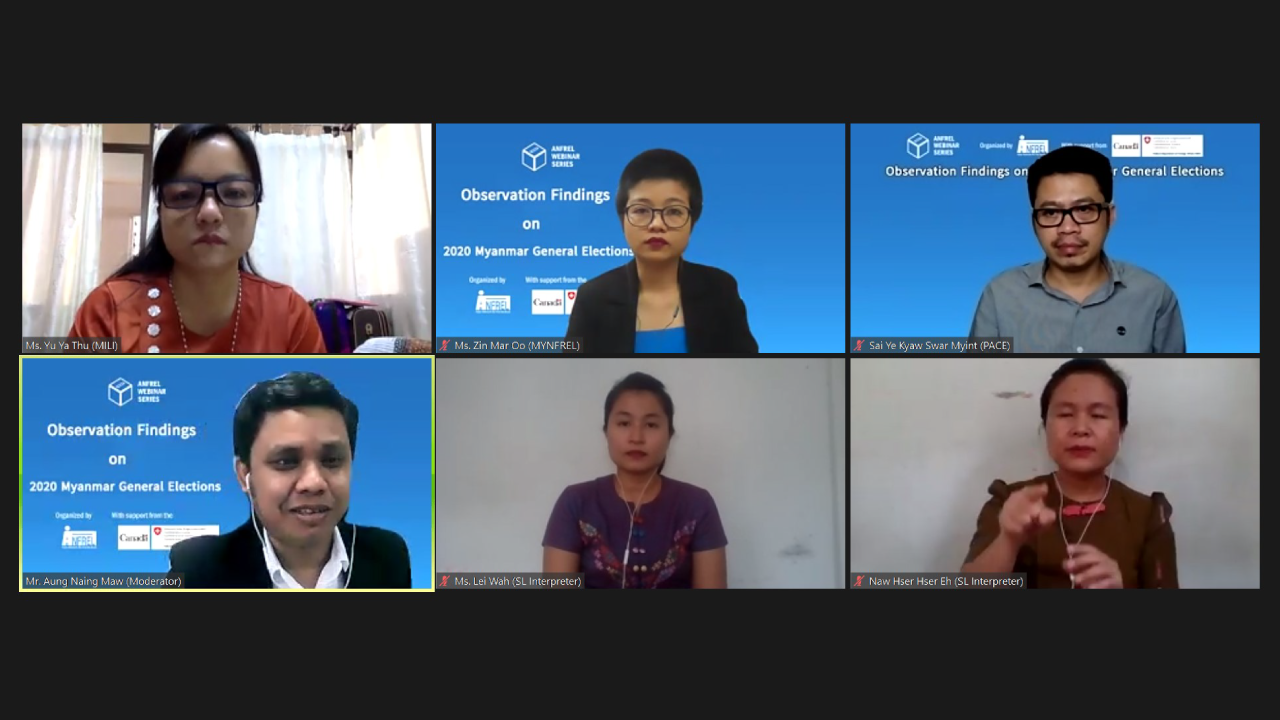 ANFREL webinar speakers and moderator. Sign language interpretations were made available during the webinar.

MILI, meanwhile, said there have been some improvements in the participation of PWDs in the electoral process. UEC has made some notifications about PWD voters to prepare polling stations to be more inclusive. Their advocacy work on setting up polling stations at the ground level of the facilities yielded positive results. Polling stations also had pen and papers as alternative communication tools should polling staff may not be knowledgeable in sign language.

Some polling stations, however, expected PWD voters to be covered by advance voting so they were not prepared to properly accommodate them. Some voters were also not as accommodating to give PWD and elderly voters priority at queues.

MILI said that while there was no outright discrimination against PWD voters observed in the electoral process, there was not much clear guidance for advance voting and election day management. Proper training for the assistance of blind voters and braille language in election materials are needed, said MILI.

MILI was told that human resource constraints and financial difficulties were some of the reasons why UEC faced difficulties in addressing accessibility issues in the elections. MILI said the budget and planning have to be carefully thought out for more inclusive elections. Government agencies should improve policies to help PWDs like in building new schools, the needs of PWDs also need to be considered. Training of polling staff also needs to be improved for them to be ready to accommodate every voter taking into account their needs and conditions.

The role of the media in the elections was also critical for free and fair elections. MYNFREL also looked at how the media covered the elections and found that there were more media efforts to report on the election in 2020 compared to the elections in 2015. In state-owned media, there was an observed diversity of news subjects not just limited to the ruling party.

The media election reporting, however, was still dominated by the top political parties National League for Democracy (NLD) and Union Solidarity and Development Party. The NLD generally received favorable coverage highlighting the good points of the party. Ethnic political parties, however, were less covered in the media due to issues of accessibility of the media to these parties and the COVID-19 related limitations.

MYNFREL said the media coverage of elections has to be more inclusive as fair and balanced reporting of election stakeholders is needed. There were also no media-initiated voter education efforts which would have helped inform more voters about the electoral process.

MYNFREL said that in their observation of the electoral process, the 2020 polls were free and fair and were in line with international standards but in order to build lasting democratic success, the inclusion of the youth as well as other sectors like PWDs and ethnic communities is important.

MILI also said that cooperation between CSOs and the UEC can be improved as there were many areas where CSOs can support the UEC but not much has been done.

PACE, meanwhile, said that there have been a number of elections that the authorities could’ve learned from but improvements in inclusiveness, transparency, accountability in the elections need to improve.

This webinar is part of a series of webinars which aims to create public awareness on democratic elections and a platform for various groups to discuss election issues in the lead up to the 2020 Myanmar General Election.