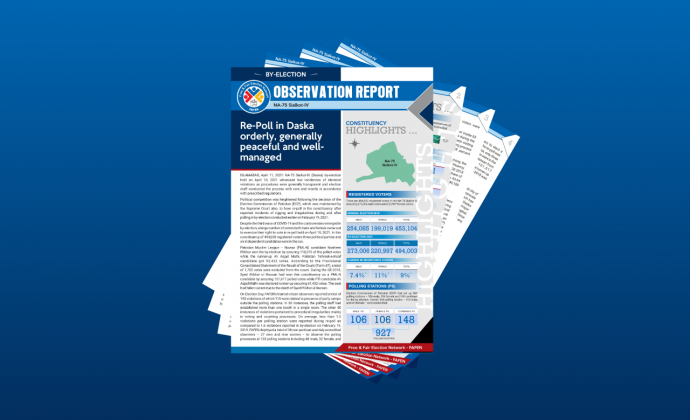 Political competition was heightened following the decision of the Election Commission of Pakistan (ECP), which was maintained by the Supreme Court also, to have re-poll in the constituency after reported incidents of rigging and irregularities during and after polling in by-election conducted earlier on February 19, 2021.

Despite the third wave of COVID-19 and the controversies emerged in by-election, a large number of voters both male and female came out to exercise their right to vote in re-poll held on April 10, 2021. In this constituency of 494,003 registered voters three political parties and six independent candidates were in the run.

Pakistan Muslim League – Nawaz (PML-N) candidate Nosheen Iftikhar won the by-election by securing 110,075 of the polled votes while the runner-up Ali Asjad Malhi, Pakistan Tehreek-e-Insaf candidate got 93,433 votes. According to the Provisional Consolidated Statement of the Result of the Count (Form-47), a total of 1,702 votes were excluded from the count. During the GE-2018, Syed Iftikhar ul Hassan had won this constituency as a PML-N candidate by securing 101,617 polled votes while PTI candidate Ali Asjad Malhi was declared runner-up securing 61,432 votes. The seat had fallen vacant due to the death of Syed Iftikhar ul Hassan.