Posted by admin@anfrel.org With 0 Comment In Cambodia, Network News

The Committee for Free and Fair Elections in Cambodia (COMFREL) deployed 5,852 election observers including members and staff of national and international NGOs for the 2012 Commune Council elections.

COMFREL observed the process of commune/sangkat council election on June 03, 2012 and found no serious irregularities, violence or otherwise, which would have led to the obstruction of electoral process.

The election management of National Election Committee (NEC) assured ballots were held secretly and that procedures on voting day ran smoothly. Nevertheless, there is much work to be done to ensure free and fair elections are held in the Kingdom of Cambodia. The management of the election negatively affected loss rights to vote of many voters because of the poor quality of the voter lists.

COMFREL found that 49% of eligible voters who could not vote although going to their polling stations (identified by indelible ink on the forefingers).These excluded voters could not find their names on the voter lists posted at polling stations or found that there were discrepancies between their identification documents and the information recorded on the voter list and were refused their right to vote.

COMFREL’s verification of the preliminary election results of the NEC saw a small difference in the reported turnout rate of voters. The different turnout rate of voters between COMFREL and NEC was only 0.5% and COMFREL found that 64.53% of the voters having names on the voter lists was going to vote while NEC found 65.03%. These results, by political party, COMFREL found that major difference was 1.11% and minor difference was 0.02%.

COMFREL found more than 3000 cases of irregularities during the “cooling-off” period and voting and counting days. This was observed at 13% of the 5,810 polling stations observed.

Some voters felt insecure or fearful when they expressed criticism of the ruling party or revealed their support of opposition candidates or parties. Compared to previous elections cases of voter intimidation had dropped down due to the decline of election related violence cases. However, voters in a few communes/sangkats were fearful because of acts of brutality that had been perpetrated prior to polling day. Among such acts reportedly affecting voter confidence were the death of environmental activist Mr. Chut Wutty in Koh Kong province, the shooting of 14-year-old Heng Chantha in Kratie province, the detention of 13 Boeung Kok Community's representatives in Phnom Penh and the case of gunfire directed at garment workers in Svay Rieng province.

COMFREL found the role of provincial and national authorities including, civil servants, military police and Royal Cambodian Armed Forces questionable. All favored the ruling party and opposed opposition parties. Moreover, COMFREL found that local authorities were to watch closely and to influence on observing voters during voting and these activities caused fear among voters, creating unreliability in the process of the election.

“Fairness” no improvement in the election process

Political campaigning during the commune/sangkat council election cannot be said to have been plyed out on an even playing field. Leader of the leading opposition party, Mr Sam Rainsy, was absent during the election campaign and there were huge differences in the ruling and opposition party’s abilities to utilise financial and human resources for campaigning activities.

Access to the media and the broadcasting time allocated to opposition political parties during the campaigning period had decreased when compared to previous elections. Mass media were largely favourable to the ruling Cambodian People’s Party (CPP). This was especially true of private television companies CTN and Bayon News who broadcast in support of the CPP while strongly criticising rival political parties. This is in violation of regulations, guidelines and policies laid out by NEC. Unlike the previous elections, the Ministry of Information also banned some independent radios from broadcasting during voting day while CPP supporting state-run and private media were not.

Misuse of state resources including, the use of state properties and state officials (civil servants and armed forces) to carry out political activity in supporting the Cambodian People’s Party (CPP) and/or to opposition to other parties that is against the laws on Political Party, the Law on Co-statutes of Civil Servants and the Law on the General Statutes for Military Personnel of the Royal Cambodian Armed Forces. The involvement of civil servants and armed forces personnel in supporting the ruling party has increased and this produced an unfair and nontransparent background to the elections.

Offering gifts and money to voters by civil servants and authorities was systematically organised before the election campaign and COMFREL is indignant that, under the Law on Elections, this vote- buying has not been considered a crime.

Without calculation of the national campaign expenditure, COMFREL estimates a local campaign expenditure of each political party that they have spent the following for each commune/sangkat contested: Cambodian People’s Party (CPP) spent about 9000USD, Sam Rainsy Party (SRP) about 1500USD, Human Rights Party (HRP) about 300USD, NorrodomRanarridh Party (NRP) about 200USD and FUNCINPEC less than 200USD.

COMFREL found that NEC lacks transparency when it came to resolving and settle complaints. The procedures for solving complaints has not been revised and improved and during voting and counting days, 80% of about 100 complaints were refused owing to a lack of documents, evidence, legal grounds or incomplete applications. The NEC, however, has not properly investigated these cases and instead opted for reconciliation as a means to solving complaints; a procedure that is unclear and lacks formal procedure

During this election the Royal Government of Cambodia and NEC do not have the political will to improve legal procedures and regulations that are necessary for genuine free and fair elections.

COMFREL does believe that the participation in the electoral process of commune councilors, from across the political spectrum, in 95% all communes/sangkats will help strengthen democratization, especially in local governance. Impressively, the number of women holding the positions of commune/sangkat chiefs and members of commune/sangkat councilors has relatively increased.

For the upcoming elections, COMFREL has insisted that the government, political parties, donors and civil society organisations should discuss and find solutions needed to restructure the management of the NEC. Regulations and mechanisms covering voter registrations, the creation of voter lists and complaint resolution need addressing urgently. Moreover, freedom of expression, freedom of information, access to media by political parties along with the ensured neutrality of civil servants and armed forces must be guaranteed by enforced regulation in order to achieve integrity, free, fair and elections in Cambodia.

For further information, please contact:
Mr. Thun Saray The Chairperson of Board Director of COMFREL and President of ADHOC Tel: 016 44 00 44 Pattern of voting between Parties

REPORT ON MISUSE OF STATE RESOURCE FOR POLITICAL PARTY PURPOSES

I. INTRODUCTION
While Cambodian laws prohibit the use of state resources for political party purposes, past observations from international and national observers have shown that the misuse of state resources by political parties remain a common pattern of Cambodia’s political process not only during election campaigns, but also during election-free periods. National and international observers have found numerous irregularities including the misuse of state properties like public buildings and vehicles and the misuse of state employees including also officials of the military and police forces to support election campaigns as well as party campaigns in election-free periods. The observed notorious misuse of state resources has mainly benefited the Cambodian People’s Party and led in the past years to an environment of fear and an uneven level-playing field for political competition. This raises the question if free and fair elections are possible under these conditions.

STATEMENT ON ELECTION ENVIRONMENT FOR THE 3rd MANDATE COMMUNE/SANGKAT ELECTION

On June 3, 2012, Neutral and Impartial Committee for Free and Fair Elections in Cambodia (NICFEC) deployed 2,000 observers, including people with disabilities, in twenty-one (21) provinces/municipalities to monitor the 3rd Mandate Commune/Sangkat Election process in order to provide information and analyze the election process as well as to improve the process in the future. In addition, seven (7) of the observers were mobile observers and twenty (20) were foreign observers 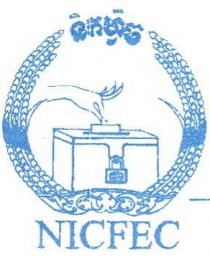