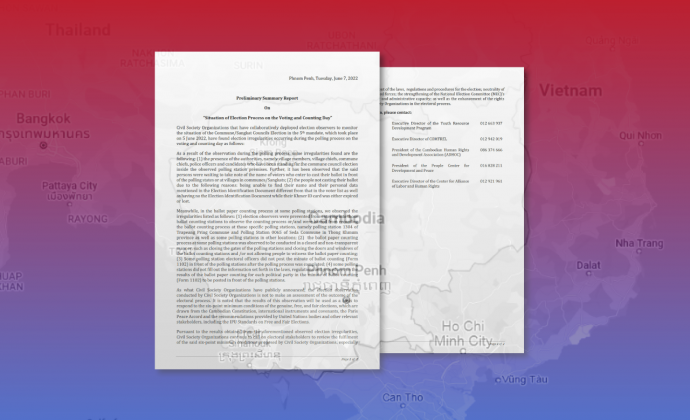 Civil Society Organizations that have collaboratively deployed election observers to monitor the situation of the Commune/Sangkat Councils Election in the 5th mandate, which took place on 5 June 2022, have found election irregularities occurring during the polling process on the voting and counting day as follows:

As a result of the observation during the polling process, some irregularities found are the following: (1) the presence of the authorities, namely village members, village chiefs, commune chiefs, police officers and candidates who have been standing for the commune council election inside the observed polling station premises. Further, it has been observed that the said persons were waiting to take note of the name of voters who enter to cast their ballot in front of the polling states or at villages in communes/Sangkats; (2) the people not casting their ballot due to the following reasons: being unable to find their name and their personal data mentioned in the Election Identification Document different from that in the voter list as well as having no the Election Identification Document while their Khmer ID card was either expired or lost.

As what Civil Society Organizations have publicly announced, the election observation conducted by Civil Society Organizations is not to make an assessment of the outcome of the electoral process. It is noted that the results of this observation will be used as a basis to respond to the six-point minimum conditions of the genuine, free, and fair elections, which are drawn from the Cambodian Constitution, international instruments and covenants, the Paris Peace Accord and the recommendations provided by United Nations bodies and other relevant stakeholders, including the IPU Standards on Free and Fair Elections.

Download the full report: "Preliminary Summary Report on 'Situation of Election Process on the Voting and Counting Day'"