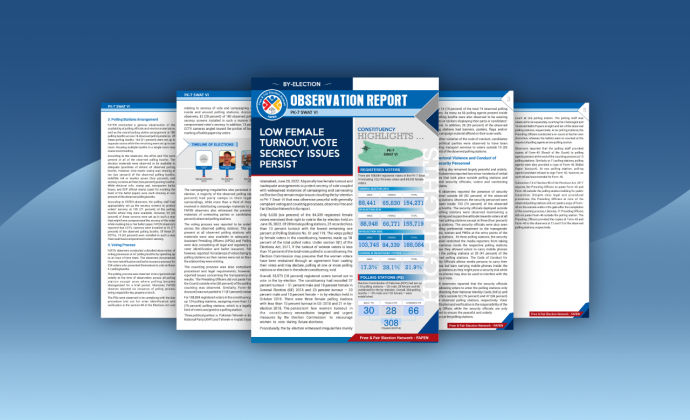 Only 6,020 (six percent) of the 84,339 registered female voters exercised their right to vote in the by-election held on June 26, 2022. Of 28 female polling stations, 22 recorded less than 10 percent turnout with the lowest remaining one percent at Polling Stations No. 51 and 119. The votes polled by female voters in the constituency, however, made up 18 percent of the total polled votes. Under section 9(1) of the Elections Act, 2017, if the turnout of women voters is less than 10 percent of the total votes polled in a constituency, the Election Commission may presume that the women voters have been restrained through an agreement from casting their votes and may declare, polling at one or more polling stations or election in the whole constituency, void

Procedurally, the by-election witnessed irregularities mainly relating to secrecy of vote and campaigning and canvassing inside and around polling stations. According to FAFEN observers, 52 (29 percent) of 180 observed polling booths had secrecy screens installed in such a manner that might have compromised voter’s secrecy. In addition, 13 polling booths had CCTV cameras angled toward the portion of booth reserved for marking of ballot papers by voters.

The campaigning irregularities also persisted in the recent by-election. A majority of the observed polling stations (59 or 80 percent) had party camps in their legally-prohibited surroundings, while more than a third of those were actively involved in distributing campaign materials to potential voters. FAFEN observers also witnessed the presence of campaign materials of contesting parties or candidates inside 14 (19 percent) observed polling stations.

The voting process was reported to be orderly and peaceful across the observed polling stations. The polling staff was present at all observed polling stations while the election materials were also available in adequate quantities. The Assistant Presiding Officers (APOs) and Polling Officers (POs) were duly completing all legal and regulatory requirements for voter identification and ballot issuance. FAFEN observers, however, reported 16 instances of voters being turned away from polling stations as their names were not on the electoral rolls of the station they were visiting.

The counting process was also compliant with the due procedural and legal requirements; however, the observers reported issues concerning the transparency of polling station results. The Presiding Officers did not paste Form-45 (Result of the Count) outside nine (50 percent) of the polling stations where counting was observed. Similarly, Form-46 (Ballot Paper Account) was not pasted in 11 (61 percent) instances.

During the General Election 2018, PTI’s candidate Mr. Amjad Ali had won this constituency while the ANP’s Waqar Ahmed Khan remained the runner-up. However, Mr. Ali vacated the seat to retain another seat that he had won. Former runner-up Mr. Ahmed won the seat in the by-election held on October 14, 2018 defeating PTI’s candidate Fazal Moula. The seat fell vacant again due to the death of Mr. Waqar Ahmed Khan on April 30, 2022 necessitating a second by-election in the constituency.