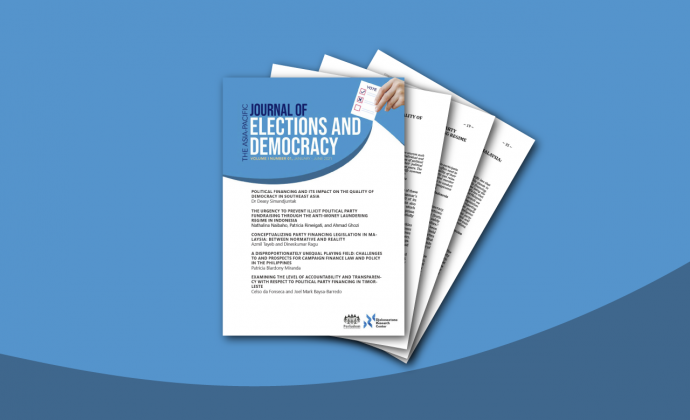 Posted by ANFREL With 0 Comment In Indonesia, Network News

The journal is an off-shoot of their Journal of Elections and Democracy, a national publication, which expanded the coverage to include studies from other countries in Asia-Pacific. The first edition covers political finance in the region in which the articles provide "an overview of the situation in the development of democracy in Southeast Asia in terms of political finance."

Perludem said they hope the regional publication will be useful for researchers, academics, and civil society to "provide recommendations and references for improving electoral governance and democratic and political processes in the Asia and Pacific region."

The following topics are published in the first edition of the journal:

• "Political financing and its impact on the quality of democracy in Southeast Asia" by Dr. Deasy Simandjuntak

• "The urgency to prevent illicit political party fundraising through the anti-money laundering regime in Indonesia" by Nathalina Naibaho, Patricia RInwigati, and Ahmad Ghozi

• "Conceptualizing party financing legislation in Malaysia: Between normative and reality" by Azmil Tayeb and DIneskumar Ragu

• "A disproportionately unequal playing field: Challenges to and prospects for campaign finance law and policy in the Philippines" by Patricia Blardony Miranda

The journal was developed under the Asia-Pacific Regional Support for Elections and Political Transitions (Respect) program managed by Perludem with the support from USAID.

Download the journal here: "The Asia-Pacific Journal of Elections and Democracy | Volume 01 Number 01"