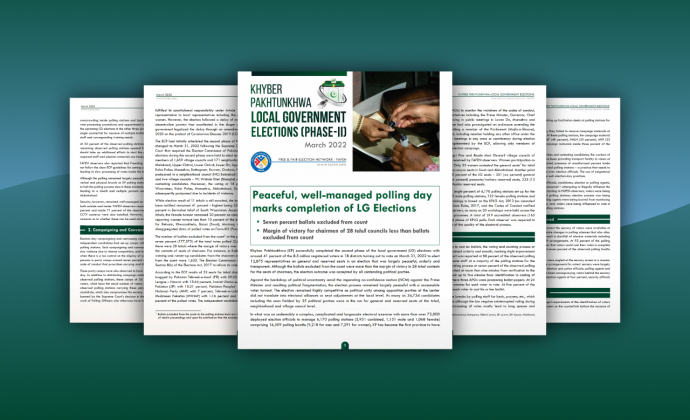 ISLAMABAD, April 5, 2022: Khyber Pakhtunkhwa (KP) successfully completed the second phase of the local government (LG) elections with around 41 percent of the 8.5 million registered voters in 18 districts turning out to vote on March 31, 2022 to elect 12,875 representatives on general and reserved seats in an election that was largely peaceful, orderly and transparent. Although the ballots excluded from the count were more than the margin of victory in 28 tehsil contests for the seats of chairmen, the election outcome was accepted by all contending political parties.

Against the backdrop of political uncertainty amid the impending no-confidence motion (NCM) against the Prime Minister and resulting political fragmentation, the election process remained largely peaceful with a reasonable voter turnout. The election remained highly competitive as political unity among opposition parties at the center did not translate into electoral alliances or seat adjustments at the local level. As many as 34,734 candidates including the ones fielded by 25 political parties were in the run for general and reserved seats at the tehsil, neighborhood and village council level.

In what was an undeniably a complex, complicated and largescale electoral exercise with more than over 72,000 deployed election officials to manage 6,170 polling stations (3,951 combined, 1,151 male and 1,068 female) comprising 16,509 polling booths (9,218 for men and 7,291 for women), KP has become the first province to have fulfilled its constitutional responsibility under Article 140-A(1) to form the third-tier of governance providing representation to local representatives including the marginalized communities such as peasants, workers and women. However, the election followed a delay of more than two years primarily due to weak political will to decentralize powers that manifested in the shape of legal complications and inadequacies. The provincial government legalized the delay through an amendment in the KP Epidemic Control and Emergency Relief Act, 2020 on the pretext of Coronavirus Disease 2019 (COVID-19).

The ECP had initially scheduled the second phase of KPLG to take place on March 27, 2022, but the date was changed to March 31, 2022 following the Supreme Court’s reversal of an earlier order by the Peshawar High Court that required the Election Commission of Pakistan (ECP) to hold these elections after Ramadan. The KPLG elections during the second phase were held to elect mayors of two city councils, chairmen of 63 tehsil councils, and members of 1,659 village councils and 171 neighborhood councils across 18 districts including Abbottabad, Swat, Malakand, Upper Chitral, Lower Chitral, Lower Dir, Upper Dir, Shangla, Tor Garh, Lower Kohistan, Upper Kohistan, Kolai-Palas, Mansehra, Battagram, Kurram, Orakzai, North Waziristan and South Waziristan. The elections were postponed in a neighborhood council (NC) Sainabad (Mansehra) due to wrong allotment of the election symbol, and two village councils – VC Wahab Khel (Shangla) and VC Mekahband (Malakand) – due to the deaths of the contesting candidates. Moreover, the voting at 18 polling stations in eight districts (South Waziristan, North Waziristan, Kolai Palas, Mansehra, Abbottabad, Kurram, Upper Kohistan and Battagram) was halted and subsequently postponed due to incidents of violence.