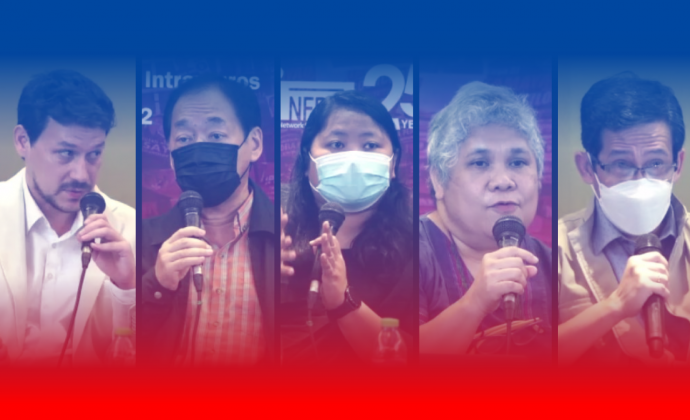 Posted by ANFREL With 0 Comment In ANFREL News, The Philippines

In order for the Philippines to achieve its democratic aspirations, the festering systemic challenges of rampant vote buying, rule of political dynasties, and the widespread disinformation should be addressed, according to panelists of a forum that tackled pathways to strengthen democracy in the country.

The Asian Network for Free Elections (ANFREL) hosted a panel discussion on 18 August 2022 with the launch of the final comprehensive report of their international election observation mission to the 2022 Philippine national and local elections.

The Asian Network for Free Elections (ANFREL) presented the findings of their international election observation mission to the 2022 Philippine polls during a panel discussion on strengthening democracy in the country.

Amael Vier, ANFREL senior program officer, noted several issues that need to be addressed including the rampant vote buying, the rule of political dynasties, shortcomings of the campaign finance regulations, the declining state of press freedom and the widespread disinformation.

The panelists shared their observations and insights on the 2022 polls and stressed several issues of vote buying, abuse of state resources, intimidation of opposition candidates and journalists, participation of the electorate and the problems encountered on Election Day including dysfunctional vote counting machines and reported election-related violence.

Caritos said poverty and impunity are the two main reasons why vote buying is rampant in the Philippines. She also said that the lack of checks and balance because of the rule of political dynasties and the lack of competitiveness in the elections lead to the abuse of state resources.

She said reforms are needed to tackle vote buying incidents where the requirement of a verified complainant can be removed and that the Commission on Elections (COMELEC) should take a more proactive role in investigating incidents. The penalty of different election offenses should also be rationalized.

On Election Day, several polling precincts encountered problems with vote counting machines which led to voters waiting for hours before they were able to cast their votes. Serrano said the COMELEC should study those incidents and gather information on the needed improvement on the training of poll workers and technical support staff.

There have been several election-related incidents and cases of harassment and disruption reported on Election Day, as well, but Alvia said these were isolated despite a heated electoral environment.

Caritos said that on the procedural aspect, the 2022 Philippines elections could be considered free and fair but there is a need to have a closer look at the substantial aspect with the vote buying incidents being rampant and an election environment that lacked competitiveness.

Watch the recording of the panel discussion here: "Recommendations and the Way forward to Strengthen Philippine Democracy"