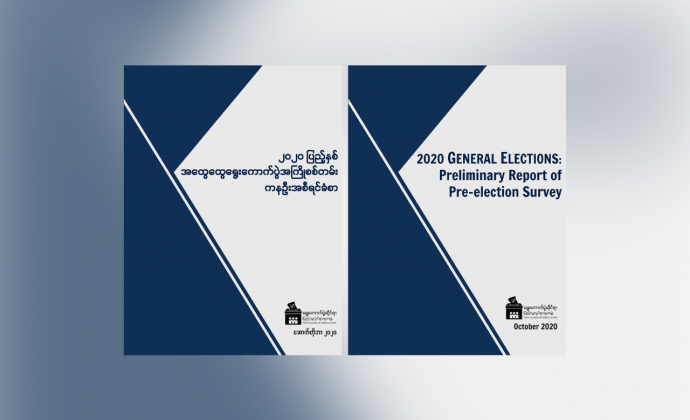 PACE Pre-Election Survey: Interest in Politics on a Downward Trend among Myanmar Citizens

The level of interest in politics is on a downward trend since 2015, according to a pre-election survey the People's Alliance for Credible Elections (PACE) conducted.

The survey was conducted between August 3 to 5, 2020 with a total of 2,577 interviews across the country. PACE noted that they were not able to conduct interviews in some locations in Kachin, Shan and Rakhine state due to security concerns.

The survey showed that the awareness of the citizens of Myanmar on free and fair elections has increased. They said secrecy of ballots, neutrality of election commission, no fraud in the process, proper vote count, accuracy of the results, equal chance to campaign and no intimidation to voters are important factors to free and fair elections.

A third of the respondents said there are no concerns or barriers for them to vote in the elections while another third said they are concerned with the COVID-19 pandemic in relation to the elections.

The 2020 Myanmar General Elections will be conducted amid the COVID-19 pandemic. Several states and regions in Myanmar are currently under stay-at-home order to curb the further spread of the virus.

While there have been calls to postpone the elections due to the current situation, about a half of the respondents expressed that "they will definitely vote" in this election.


It is also available in English which can be access here: Pre-Election Survey: 2020 General Elections