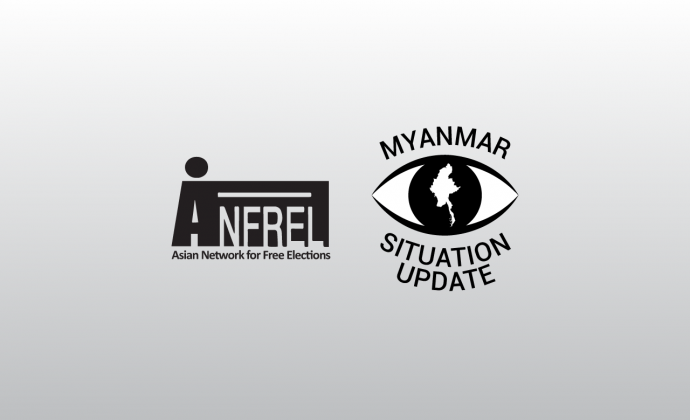 Posted by Campaign & Advocacy With 0 Comment In ANFREL News, Myanmar

Myanmar ousted leader Aung San Suu Kyi appeared in the special court in Naypyitaw on 29 June and the court accepted the two evidence documents submitted by the junta for the case charged under Section 505(b) to incite unrest in the country although the lawyers of Aung San Suu Kyi objected. Those two documents are NLD party statements issued on 7 and 13 of February after the NLD’s leaders have been detained. Her lawyer also expects the trial will run longer than scheduled, with the prosecution still to call nearly two dozen witnesses.

The junta has been building strong high-tech surveillance tools that can be used for internal repression, many of which come from Western companies. An investigation conducted by the “Lighthouse Reports” revealed that those technologies include high tech software that can extract data from different devices and surveillance over the internet.

More than 50,000 Karen people have been displaced since the beginning of the year.  Local community groups expect that there is much more the international community can do to help as humanitarian as is not enough meeting the survival of the people who fled their villages and living in makeshift shelters. Indian media also reported that  over 700 people from Myanmar, mostly civilians, have entered Mizoram in the past few weeks. Altogether 10,025 Myanmar nationals have so far sneaked into Mizoram following the military coup. Media also reported that the Myanmar military shells struck Magar Yang camp, home to over 1,600 internally displaced persons in Kachin State, along the China border.

Junta forces have recently arbitrarily arrested at least six lawyers defending political prisoners, violating both the lawyers’ rights and those of their clients, Human Rights Watch said. At least three of them have been arrested while attending court and arresting lawyers makes it abundantly clear that Myanmar’s junta has no interest in providing a fair trial for pro-democracy activists and that justice under military rule is an illusion.

Protests continued in different parts of Myanmar despite the crackdown by the junta. The clashes between the junta forces and the civil resistance fighters or Ethnic Armed Organizations also emerged across Myanmar particularly in Chin, Shan, Kayah, and Kayin States and Sagaing Region.

According to the information compiled by ANFREL, at least 43 bomb blasts happened across Myanmar in the past week. It was reported that at least 14 people were injured and 4 killed.The Assistance Association for Political Prisoners (AAPP) reported that, as of 3 July, 890 people have been killed by the junta. 5,086 people are currently under detention and 223 are sentenced. 26 have been sentenced to death (incl. 2 children). 1,964 are evading arrest warrants.