Moving Toward the Indonesia Presidential Election 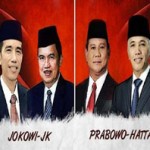 Indonesia is preparing for new leadership thanks to elections scheduled for 9 July 2014. Over 188 million Indonesians are registered to cast their ballots at the 478,591 polling stations set up by the General Elections Commission of Indonesia(KPU). Elections officials have been working overtime to finalise election preparations as the two pairs of contending candidates worked during the final stage to woo voters, debate issues and promote their manifestos. Joko Widodo (popularly known as Jokowi), the recent Jakarta Governor, and his running mate former vice-president Jusuf Kala (JK) are competing head-to-head with an ex-Military General, former head of the Special Forces, and leader of the Gerindra Party—Prabowo Subianto, and his running mate Hatta Rajasa. Days before the election, polls showed the two slates of candidates in a close battle for the presidency.

Indonesian politics are significantly polarised between Jokowi or Prabowo, a somewhat new occurrence for the country. Society, mass organizations, the media and CSOs are sharply divided. Intense media campaigns and propaganda wars, both online and through mass media, are being carried out by supporters of both sides to undermine their opponents. Such battles have become commonplace in Indonesia, resulting in rising tensions and potential conflict. The people of Indonesia nevertheless have high hopes that the elections will bring a future leader to continue a reform agenda that will bring economic development, battle corruption, enhance transparency, respect Human Rights and bring prosperity to the people.