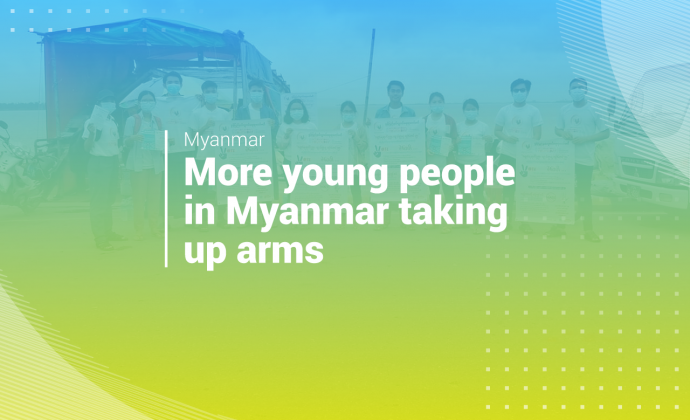 First published on the Bangkok Post on 28 February 2022, "More young people in Myanmar taking up arms" was produced under the ANFREL Southeast Asia Media Fellowship on Election Reporting.

Young people in Mon State who not long ago were actively engaged in campaigning for elections in Myanmar have shifted from protesting in the streets against the military to taking up arms to defend their rights and freedoms.

Thant Sin Lin Htet is among those who was an enthusiastic get-out-the-vote campaigner prior to the November 2020 polls, in which he was also proud to cast a ballot. But when the military staged a coup on Feb 1, citing claims that the elections won overwhelmingly by the National League for Democracy (NLD) were rigged, he took to the streets to join strikes every day.

Many other young people who were active in the election campaign protested in Mawlamyine, the largest city in Mon State, for most of February and March 2021 despite threats to their security. They did not believe the military's claims of election fraud. But as the violence against protesters escalated in centres across the country, they realised that being on the streets was no longer safe.

For many who wanted to continue the struggle, fleeing the towns and cities for jungle hideouts where they could get combat training became a new option.

Thant Sin Lin Htet is now a member of the People's Defence Force (PDF) in the Southern Regional Command. Formed on May 5 last year to counter the military junta's "brutal attacks against the unarmed civilians who were marching on the streets in peaceful demonstrations", the PDF is the armed wing of the National Unity Government (NUG) under the Ministry of Defence.

The NUG is the interim government formed by members of parliament who were elected in November 2020. It has been waging diplomatic and media campaigns worldwide for official recognition, and urging other countries not to deal with the military junta, officially known as the State Administration Council (SAC),

On Sept 8 last year, the NUG declared a "people's defensive war" against the junta.

During the 2020 general elections, the NLD won a landslide victory in Mon State, winning 34 of its 45 constituencies. The Mon Unity Party won the remaining 11 seats. Military-backed parties and candidates did not win a single seat.

In Ye Township, the military later claimed that the NLD had won because of fraud. In fact, the Mon Unity Party won the constituency, and the only fraud uncovered there was attempted double voting by a member of the military-backed Union Solidarity and Development Party (USDP).

"Voting fraud is a vicious act by the military," said Ko Dana Tun, vice-president of the Mawlamyine University Students' Union.

Despite a few election-related complaints by political parties in the area, the elections were perceived as credible. "There was a huge vote gap between the winning party and the losing party. I could not believe the vote was rigged," Thant Sin Lin Htet said.

Voter turnout in Mon State was 58%, seven percentage points higher than in the 2015 election. That was impressive -- and a tribute to the success of the youth-led voter mobilisation drive -- given that polling took place amid Covid-19 restrictions.

For these young people, the attempt by the military to overturn the results of the election was a bitter pill to swallow. But after protesting in a non-violent manner for weeks and months, some decided to take their struggle to another level.

"We want democratic reforms, and we are working to reform the process, but we do not accept the coup. We are against it," said Majour Thonya, a member of the local PDF. "But the military has carried out terrorist attacks. The only way to respond to this is to take up arms to protect the people, so we took up arms."

Mon State is located in the southeastern region where two main ethnic armed groups -- the Karen National Union and the New Mon State Party -- are based. The PDF's Southern Division is based in and around Mon State.

Young people from Mon, Karen and Tanintharyi divisions have gone to areas held by ethnic armed groups for military training. Most of them joined the PDF under the NUG Ministry of Defence. It says at least 10,000 people have been trained.

According to a ministry document, about 15 PDF groups are active within Mon State. Most of the members are university students and other young people who had served as polling station representatives, volunteers and election observers previously.

For Thant Sin Lin Htet, being armed is inevitable.

"I do not want the next generation to be left under the dictatorship. We do not want the future to be lost like ours, so some of us are pursuing an armed path," he said.

A young man who is the editor of the Lagoon Eain Revolution Newsletter said, "The people were abused. Their desires were plundered." All of the local and foreign organisations that had observed the 2020 election said the political exercise was free and fair.

"Being armed is inevitable. It is used only to win a war in a revolution. After winning the war, we must go through nation-building through political means," said Ko Dhana Tun, adding that he wants to see the country built with a civilian government that emerges from genuine elections.

The NUG Ministry of Defence has issued policies related to the armed movement, which comply with international military law and the provisions of the Geneva Conventions on war.

"We will inevitably face war, but we are prepared to follow the rules of war, just as the commanders have instructed us to," said Bo Thonya, a PDF member.

As of Feb 22 this year, the Assistance Association for Political Prisoners said 1,568 people had been killed by junta forces while 12,289 had been arrested, charged or sentenced. A total of 9,276 are still under detention and arrest warrants are pending for another 1,973 people.

The UN High Commissioner for Refugees (UNHRC), as Feb 7, has recorded an estimated 438,800 internally displaced people since the coup due to ongoing armed conflicts. That is in addition to the 370,000 who had fled their homes during earlier outbreaks of violence between the military and ethnic armed groups.

Another 8,000 people from Myanmar have taken refuge across the border in Thailand, most of them fleeing clashes between the Tatmadaw and Karen rebel forces. About 60,000 more were caught attempting to cross the border illegally in search of jobs and an escape from dire economic conditions in Myanmar last year. Tens of thousands more are believed to have made it across undetected, say groups inside Thailand that work with migrants.