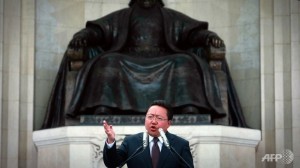 ULAN BATOR: Preliminary results Thursday from Mongolia's presidential election suggested that the front-running incumbent is poised to secure a second term after steering the resource-rich nation through a spectacular -- albeit divisive -- mining boom.

President Tsakhia Elbegdorj was on course to gain more than 50 percent of the votes cast, with results from all but 57 polling stations collated by the General Election Commission (GEC).

Data from the 1,839 polling stations released early Thursday showed that more than 1.2 million of Mongolia's 1.8 million electorate had voted, with Elbegdorj poised to keep out his opponents -- a champion wrestler and the country's first woman presidential contender.

The exploitation of Mongolia's vast coal, copper and gold reserves has helped transform an economy once characterised by nomadic lifestyles not far removed from its famous empire-building hero, Genghis Khan, 800 years ago.

But rising inequality in the cities and environmental damage in rural areas have dominated the political debate, while recent falls in commodity prices and slowing demand in the key market of China sparked uncertainty ahead of the election.

Many of the 57 polling stations where votes were still to be counted are likely to be in the rural areas where Elbegdorj's opponents garner most support.

But the former journalist, who played a leading role when Mongolia peacefully threw off 70 years of communist rule in 1990, still appears to be on course for victory. He won 614,960 votes, according to early figures.

The GEC announced soon after polls closed at 10:00 pm (1400 GMT) Wednesday that it would aim to announce official election results on Thursday.

At one polling site in the capital Ulan Bator visited by AFP, electronic voting machines were experiencing glitches, which meant voters could not be identified by their fingerprints.

Accusations of vote-rigging in 2008 parliamentary elections resulted in deadly riots, and led to Mongolia adopting an electronic voting system.

But the GEC said the computer problems were confined to two voting stations and were "not widespread".

Results of parliamentary polls last year were delayed by complaints about the electronic system. However, the election was largely considered a success.

Elbegdorj became president in 2009 after twice serving as premier. He has promoted a policy of using foreign cash to drive the rapid development of Mongolia's economy, which is galloping ahead at double-digit rates.

The growth has been boosted by the arrival of foreign mining giants, which have moved in to exploit huge and largely untapped reserves of coal, copper and gold that China and other customers need to fuel their industries.

Elbegdorj's main challenger is Badmaanyambuu Bat-Erdene, who had won 514,375 votes, according to preliminary results early Thursday. The champion wrestler is the opposition Mongolian People's Party's candidate.

The third candidate, Natsag Udval from the Mongolian People's Revolutionary Party (MPRP), is the country's first woman vying for the presidency. She had won 79,833 votes, according to the early figures.

Udval is a supporter of former president Nambar Enkhbayar, who is serving a two-and-half year jail term for corruption.

MPRP general secretary Gankhuyag Shiilegdamba criticised the Democratic Party for celebrating victory, which he said was against Mongolian election law.

"There was quite a number of violations, starting from computers that did not work," he added.

"I will raise these issues at an appropriate moment."

Both of Elbegdorj's challengers want to amend the contract for the Oyu Tolgoi mine, amid concerns over the social inequality that has arisen from Mongolia's breakneck development.

Anglo-Australian miner Rio Tinto and Canada's Turquoise Hill Resources have jointly led construction of the $6.2 billion mine, which is expected to produce 450,000 tonnes of copper concentrate a year and generate up to one-third of government revenue by 2019.

The first shipments from the mine were blocked by the government days before the polls and still remain grounded, Rio Tinto spokesman Bruce Tobin told AFP, without giving a reason.

A previous delay earlier this month followed a government demand that Rio Tinto keep all export revenue in Mongolia, Prime Minister Altankhuyag said. The government has not commented on the recent delay.