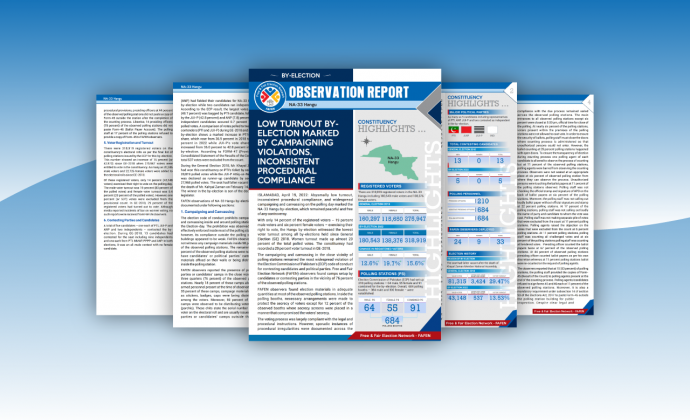 ISLAMABAD, April 19, 2022: Abysmally low turnout, inconsistent procedural compliance, and widespread campaigning and canvassing on the polling day marked the NA-33 Hangu by-election, which remained peaceful and free of any controversy.

With only 14 percent of the registered voters – 19 percent male voters and six percent female voters – exercising their right to vote, the Hangu by-election witnessed the lowest voter turnout among all by-elections held since General Election (GE) 2018. Women turnout made up almost 20 percent of the total polled votes. The constituency had recorded a 29 percent voter turnout in GE-2018.

The campaigning and canvassing in the close vicinity of polling stations remained the most widespread violation of the Election Commission of Pakistan’s (ECP) code of conduct for contesting candidates and political parties. Free and Fair Election Network (FAFEN) observers found camps setup by candidates or contesting parties in the vicinity of 76 percent of the observed polling stations.

FAFEN observers found election materials in adequate quantities at most of the observed polling stations. Inside the polling booths, necessary arrangements were made to protect the secrecy of voters except for 12 percent of the observed booths where secrecy screens were placed in a manner that compromised the voters’ secrecy.

Three political parties i.e. Pakistan Tehreek-e-Insaf (PTI), Jamiat Ulema-e-Islam Pakistan (JUI-P) and Awami National Party (ANP) had fielded their candidates for NA-33 Hangu by-election while two candidates ran independently. According to the ECP result, the largest votes share (48.7 percent) was bagged by PTI candidate, followed by the JUI-P (42.8 percent) and ANP (7.8) percent. The independent candidates secured 0.7 percent of the polled votes. A comparison of votes polled to two main contenders (PTI and JUI-P) during GE-2018 and recent by-election shows a marked increase in PTI’s vote share, which rose from 36.9 percent in 2018 to 48.7 percent in 2022 while JUI-P’s vote share also increased from 36.0 percent to 42.8 percent in 2022 by-election. According to FORM-47 (Provisional Consolidated Statement of the Results of the Count), a total 537 votes were excluded from the count.

During the General Election 2018, Mr. Khayal Zaman had won this constituency on PTI’s ticket by securing 28,819 polled votes while the JUI (P) Attiq-ur-Rehman was declared as runner-up candidate by securing 27,968 polled votes. The seat had fallen vacant due to the death of Mr. Khayal Zaman on February 14, 2022. The winner in the by-election is son of the deceased legislator.