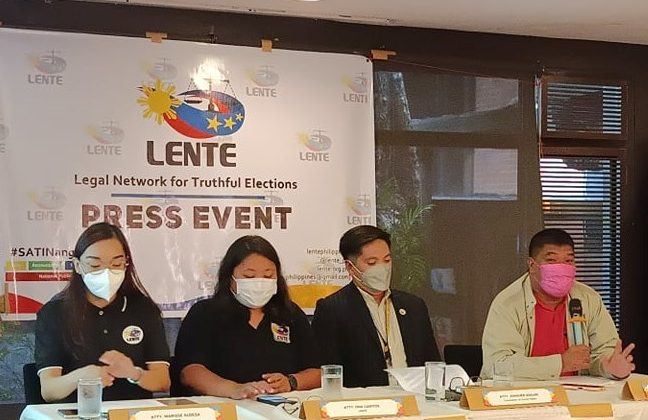 Posted by ANFREL With 0 Comment In Network News, The Philippines

On LENTE's plans for Election Day

The Legal Network for Truthful Elections (LENTE) has launched several initiatives with its partner organizations and monitoring projects to ensure Safe, Accountable, Transparent, and Inclusive elections this May 9, 2022.

LENTE is among the civil society organizations that were convened by the Commission on Human Rights (CHR) to take part in the Bantay Karapatan sa Halalan (BKH) which aims to utilize human rights perspective in the monitoring of the 2022 national and local elections. BKH is the brainchild of former CHR chairperson Chito S. Gascon.

In partnership with the Teacher's Dignity Coalition (TDC), LENTE and TDC are launching a hotline that may be used by teachers to report their issues and concerns before, during and after the May 9 elections. This hotline partnership has been a staple service by the two organizations since the 2010 national and local elections.

More importantly, LENTE is proud to announce that it will be mobilizing over 4,000 volunteers from its 40 law school chapters nationwide on Election Day. Currently, these law school chapters are conducting pre-election monitoring activities such as public education activities, local debates/interviews/forums and providing legal services to the public and other CSOs. On Election Day, LENTE volunteers will do election monitoring and monitoring of vulnerable sectors' voting. The monitoring will focus on the implementation of the Election Day guidelines with particular focus on the health and safety protocols, and the voting experience of persons with disability, older persons, indigenous peoples, and persons deprived of liberty voters. The result of these monitoring activities are towards strengthening and bolstering of advocacy activities and electoral reforms for the vulnerable sectors as well as help guide our recommendations to COMELEC and Congress for future electoral exercises.

Currently, LENTE is also lobbying COMELEC to approve its pilot voters' transportation project which aims to make voting accessible for the vulnerable sectors from Las Pinas, Ormoc, Zamboanga City, and Bukidnon. The project aims to provide transportation to voters from vulnerable groups from their place of residence to their voting centers so that they are able to vote freely on Election Day.

LENTE also calls on COMELEC to make election information accessible to persons deprived of liberty by making the e-rallies of candidates live-streamed on COMELEC's Facebook available to our PDL voters.

In addition to these, LENTE is also conducting focused election monitoring project in the Bangsamoro Autonomous Region in Muslim Mindanao (BARMM) to produce recommendations to further improve the Bangsamoro Electoral Code filed by the minority block of the parliament.

LENTE is also doing its first media monitoring project that aims to enhave the legal framework on campaigning, to observe media coverage of candidates, and to undertake efforts on how to curb online misinformation and disinformation in elections.

Moreover, in collaboration with the COMELEC, Department of the Interior and Local Government (DILG), and Philippine National Police (PNP), LENTE plans to: 91) do reporting if vote-buying incidences with the anti-vote buying task force including electronic mode of transactions; and (2) mobilization of the National Secretariat, Law School Chapters, and other partners for the reporting.

LENTE leads implementation of study RE abuse of state resources

The Legal Network for Truthful Elections (LENTE), in collaboration with the Right to Know. Right Now! Coalition, leads the implementation of an abuse of state resources (ASR) monitoring study nationwide, the first of its kind in the Philippines, which gauges the misuse of government resources during the campaign period.

Initial results from the monitoring show that only 21.5% or 28 out of 130 voter respondents and 28% or 45 out of 161 community leader respondents said that they have observed candidates using state vehicles or state resources during their campaign. While the numbers may be interpreted to have few instances of candidates using state vehicles or state resources observed during the campaign, a focused group discussion with the long-term observers, however, revealed that people have a hard time identifying instances of abuse of state resources and differentiating between social services and ASR. Thus, public awareness and discussion on the abuse of state resources need to be elevated, especially on the part of the voters.

On the other hand, the part of civil servants, the observation is not the same. 93% or 66 out of the 71 civil servants interviewed claimed that they are aware of the legal restrictions imposed on government employees for the conduct of campaign activities.

We recommend that we further refine the current legal framework for ASR, particularly, its definition. While there are laws prohibiting the use of state resources such as vehicles, buildings, civil servants, and other state resources during elections, much effort is left to be done in terms of law enforcement which presently leave the electoral system vulnerable to manipulation and misuse of state resources by incumbent officials. We also call on the general public to be more cooperative and vigilant and report instances of abuse of state resources to oversight bodies and to LENTE.

After these initial findings, our long-term observers will conduct a second round of interviews with the abovementioned stakeholders. In addition, the LENTE Secretariat will conduct national-level research on the abuse of public infrastructure and vehicles, state funds on programs and projects, the politicization of civil servants, and the use of state media, with the COMELEC, CSC, DILG, and several CSOs as respondents.