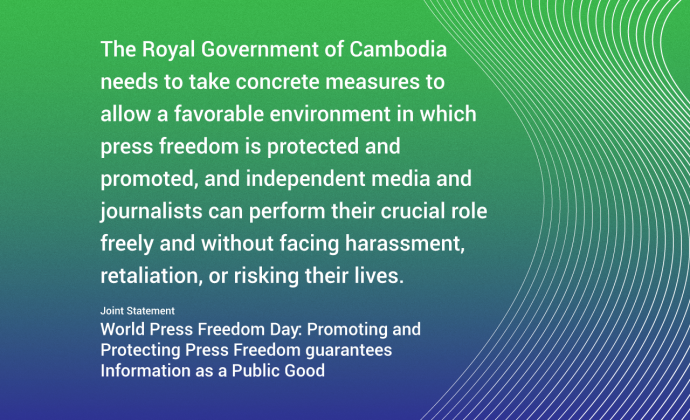 Phnom Penh, 3 May 2021 - On the occasion of the World Press Freedom Day, we - the undersigned non-governmental organizations – recall that freedom of expression includes the right to a free and independent media as well as the rights to hold opinions and to seek, receive or impart information and ideas of all kinds. The press plays a fundamental role in ensuring a healthy and prosperous democracy. We are, therefore, deeply concerned about the continued deterioration of the media environment in Cambodia and urge the Royal Government of Cambodia (“RGC”) to cease the ongoing harassment of independent media outlets and journalists for exercising their fundamental right to freedom of expression, to end the rampant impunity against attacked and murdered journalists, to immediately repeal repressive legislation undermining fundamental freedoms – including press freedom - and to ensure that any future legislation is drafted in line with Cambodia’s human rights obligations and through a transparent and consultative process with civil society.

Press freedom remains a mere aspiration for independent media and journalists in Cambodia, as the trend of silencing them has been constant in the past few years. Consequently, Reporters Without Borders’s World Press Freedom Index 2020, which evaluates the overall performance of countries and regions in the world as regards media freedom, ranked Cambodia at a dismal 144 out of 180 countries assessed – falling 12 places since 2017 and categorizing it as a “not free” country.

Independent media outlets and journalists indeed continue to face numerous barriers to conducting their legitimate reporting work freely and without self-censorship. A recent report released by a local journalists’ association shed light on these obstacles and notably highlighted that in 2020 only, no less than 72 journalists were judicially harassed, with over 42 of them detained, questioned or imprisoned. Most of them were charged with incitement under Article 494 and 495 of the Cambodian Criminal Code, as it is for instance the cases of Sok Oudom, the owner of Rithysen radio station in Kampong Chhnang province and Ros Sokhet, a journalist and the publisher of the Khmer Nation newspaper, who both were convicted and received prison sentences. Furthermore, the case of RFA reporters Uon Chhin and Yeang Sothearin - arrested in November 2017 and charged with espionage and alleged production of pornography – is yet to be resolved. While they were released on bail in October 2019, the two former journalists have been left in legal limbo for over three years, with no resolution of their case in sight. We further call for the dropping of all charges against journalists Yeang Sotherarin, Uon Chhin, for the immediate release of convicted journalists Sok Oudom and Ros Sokhet and for the reinstatement of the revoked media licenses.

Worryingly, the COVID-19 pandemic has heightened intolerance of authorities to criticism, and journalists have become increasingly vulnerable to targeting and prosecution for their legitimate reporting activities on the topic. Between January and April 2021, three journalists were arrested and the licenses of six media outlets were revoked by the Ministry of Information for their reporting on the Government’s response to Covid-19. This has created a chilling effect among independent reporters, exacerbated self-censorship and hampered citizens’ access to vital information. In this context, we recall that the media, together with authorities, allows for the wide dissemination of Covid-related information to the public across the country. We, therefore, urge the RGC to recognize the ever more crucial role of journalists in this time of global health crisis and ensure that they can carry out their mission free of fear.

Besides, offenses against journalists continue to occur in all impunity. In 2020, at least 22 journalists were either attacked or threatened with violence while on duty and one journalist died in an alleged traffic accident without proper investigation. For instance, on 28 September 2020, four online news journalists were attacked by a group of plainclothes men who the journalists believed were timber traders seeking revenge on them after the reporters told police that the group had committed forestry crimes. Likewise, on 20 October 2020, two journalists were attacked while they were investigating the illegal activities of timber traders in Stung Treng province. While complaints with the relevant authorities were filed by the victim journalists, justice has yet to be delivered. In addition, since 1994, 13 journalists have been murdered for reporting on the Cambodian elites or allegations of corruption by high-ranking officials and the military. We further urge the RGC to take concrete actions to ensure that journalists are safeguarded while performing their crucial role and to put an end to the impunity of crimes committed against journalists by undertaking effective, independent, transparent investigations and prosecuting perpetrators in accordance with international human rights standards.

Besides, the RGC has pushed for more repressive legislation undermining freedom of expression online and offline. In April 2020, the Law on the Management of the Nation in a State of Emergency was adopted, giving unrestricted powers to the government to restrict fundamental freedoms including media freedom. The RGC also recently enacted a Sub-Decree on the Establishment of a National Internet Gateway that facilitates state mass surveillance and censorship by directing allinternet traffic to a gateway controlled by the government. In addition, in January 2021, the General Commissariat of the National Police issued a directive to the municipal and provincial police stating that journalists are prohibited from filming police investigations on criminal activities, thus restricting press freedom. The government has also drafted a Law on Cybercrime containing provisions that would curtail freedom of expression online, if passed. We, therefore, call on the RGC to immediately amend or repeal all repressive laws and to ensure any future legislation is drafted in line with Cambodia’s international human rights obligations through a transparent and consultative process.

Cambodia cannot achieve democracy without a free and independent press that enables access to information as well as transparency and accountability of state institutions. The RGC needs to take concrete measures to allow a favorable environment in which press freedom is protected and promoted, and independent media and journalists can perform their crucial role freely and without facing harassment, retaliation, or risking their lives. Further, it is also equally important to encourage journalists to conduct their investigative and reporting duties in a professional and independent manner to ensure that they deliver accurate and reliable information to the public and contribute to improving governance.

This statement was endorsed by: