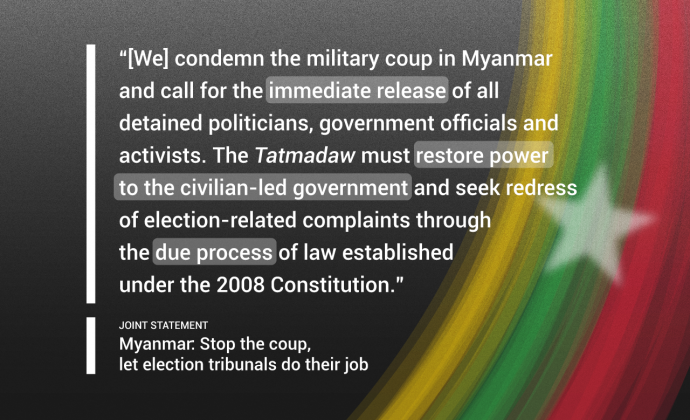 Posted by Campaign & Advocacy With 0 Comment In Myanmar, Statements

On 1 February, the armed forces of Myanmar (Tatmadaw), ostensibly acting on allegations of voter fraud in the general elections of 8 November 2020, detained numerous government officials, including State Counsellor Daw Aung San Suu Kyi, President U Win Myint, and Union Election Commission (UEC) Chair U Hla Thein, as well as pro-democracy activists and politicians from the ruling National League for Democracy (NLD) and other parties.

The Tatmadaw subsequently announced that it would seize power, declare a one-year state of emergency, and install Vice-President and retired general U Myint Swe as acting president. It was also announced that new elections would be held after the state of emergency under a new election commission, which was later appointed on the night of 2 February.

The undersigned election or human rights monitoring organizations condemn the military coup in Myanmar and call for the immediate release of all detained politicians, government officials, and activists. The Tatmadaw must restore power to the civilian-led government, and seek redress of election-related complaints through the due process of law established under the 2008 Constitution.

Indeed, Myanmar’s Constitution and election laws provide a mechanism to resolve disputes in the form of election tribunals. The military-backed Union Solidarity and Development Party (USDP), which has repeatedly made claims of vote-rigging and irregularities in the recent general elections, has like any other stakeholder the legal right to formally contest election results. It certainly has done so, filing 174 complaints out of the 287 received by the UEC.

Election observers were looking forward to seeing all election-related complaints and potential evidence presented and addressed in tribunal proceedings. According to our information, the UEC was about to proceed with the appointment of election tribunals when the military intervened. Election dispute resolution is an integral part of any electoral process, which rests on the fundamental premise that all sides act in good faith.

Therefore, the Tatmadaw must back down from its coup attempt and instead engage in a peaceful and transparent election dispute resolution process. The road to a fully realized democracy is long and arduous, but it is important that all stakeholders commit to upholding and protecting democratic norms. A repeat of what transpired after the 1990 general elections would mark a stark return to authoritarianism and will not be accepted by the people of Myanmar and the international community.