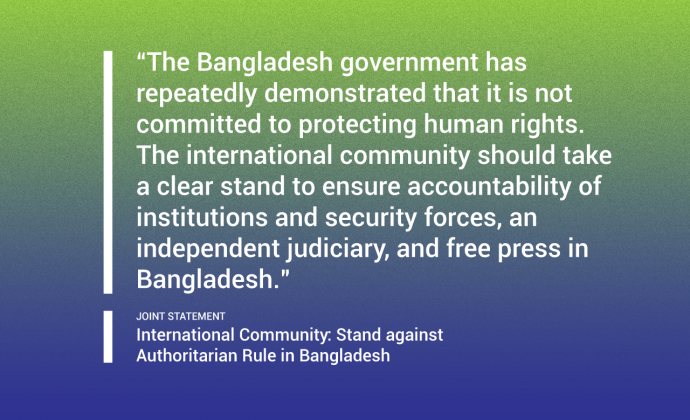 The international community should take a strong stand for the protection of human rights in Bangladesh, seven human rights groups said on International Human Rights Day. As Bangladeshis grapple with the impact of Covid-19, the ruling Awami League has used the pandemic to tighten the screws on critics and the free press, further entrenching authoritarian rule.

The government has consistently targeted dissidents with the Digital Security Act-2018, the Special Powers Act-1974, and other draconian laws. Security forces commit enforced disappearances, extrajudicial killings, and torture with impunity.

The groups expressed support for a bipartisan letter from the United States calling for sanctions on senior commanders of Bangladesh’s Rapid Action Battalion (RAB), a counter terror paramilitary force notorious for committing grave abuses. The imposition of sanctions would be a landmark step towards ending the culture of impunity for abuses by security forces in Bangladesh and would serve to deter future human rights violations. Other countries with similar sanctions regimes, including the UK, Canada, and the EU, should also explore pursuing such sanctions, the organizations said.

The Covid-19 pandemic shed light on vast inequalities and corruption in access to health care in Bangladesh. Healthcare workers reported being under pressure to reserve lifesaving care for the political elite or those with powerful connections. Meanwhile, criticism of these double-standards or the government’s handling of the crisis was met with arbitrary arrests and detention.

Prominent journalists such as Abul Asad, Ruhul Amin Gazi, and Shafiqul Islam Kajol, cartoonist Ahmed Kishore, and writer Mushtaq Ahmed remain in detention, despite calls from the UN to reduce prison populations to prevent the spread of Covid-19 particularly by releasing low-risk offenders and those in pretrial detention.

Completely disregarding guidance from the UN, civil society, and donors, the government hastily relocated Rohingya refugees to the remote island of Bhasan Char without a long-promised, expert technical and protection assessment of conditions on the island. Rights organizations have reported that at least some of these relocations appear to be forced and without informed consent, in violation of international law.

The Bangladesh government has repeatedly demonstrated that it is not committed to protecting human rights. The international community should take a clear stand to ensure accountability of institutions and security forces, an independent judiciary, and free press in Bangladesh, the organizations said.