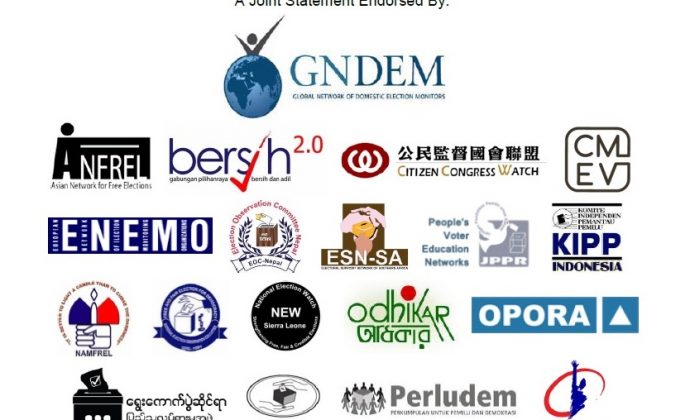 Posted by Campaign and Advocacy With 0 Comment In Cambodia, Statements

We, as domestic and international election monitors, denounce the attempt by the Government and the National Election Committee (NEC) of Cambodia to legitimize the upcoming July 29 general election by accrediting large numbers of biased election monitors.

It is our opinion that the 80,000 domestic observers authorized by the NEC show neither the autonomy nor the skills to conduct an independent, reliable assessment of the elections. As a matter of fact, the two biggest contingents of these monitors are deployed by organizations with close personal ties to the ruling Cambodian People’s Party (CPP) — the Union of Youth Federation of Cambodia (UYFC), led by none other than Hun Many, one of the Prime Minister’s sons, while the Cambodian Women for Peace and Development (CWPD) is led by Deputy Prime Minister Men Sam An. Together, they account for more than half of the people receiving observer cards from the NEC.

Many of the 107 groups which have obtained accreditation also display some level of ties with the ruling party, and most of them are civil society organizations with perfunctory knowledge of politics, electoral processes and assessment methods. While this election is met with little enthusiasm from the population and campaigning is tame by all standards, Cambodia has seen a surprising surge in the number of citizens registering to participate as domestic observers. In fact, there will be more than twice as many domestic observers this year than there were for the 2017 commune elections, despite the regretful absence of established groups like COMFREL and NICFEC, which both felt compelled to refrain from participating in any capacity in this sham electoral process.

Groups such as the International Conference of Asian Political Parties (ICAPP) and the Centrist Asia Pacific Democrats International (CAPDI), both having CPP leaders on their board, are known to rubber-stamp elections in authoritarian regimes as “free and fair.” We call for the political party alliances affiliated to the CPP disguising themselves as election monitoring groups to present their standards and methodologies for their assessments.

Accredited foreign observers also include members of the European Council on International Relations and the European Council of Tourism and Trade, but both groups are headed by a notorious “observer for hire” who has endorsed in the past the leaders of Kazakhstan, Zimbabwe, and Venezuela, despite unanimous denunciation of human rights abuses by the international community.

The presence of untrained, so-called election observers is deplorable as it is highly prejudicial to the integrity of the polls. Between the presence of local government officials, CPP party agents and biased observers, all rooting for the ruling party, many voters might feel intimidated when their time comes to enter a polling station and cast their ballot. Inviting organizations and personalities with questionable motives and methodologies desecrates the inherently neutral process that is election monitoring. We take offense that our main instrument to promote free and fair political processes is being utilized by authoritarian regimes desperate for legitimacy.

Genuine election processes place a premium on the fundamental human rights. We ask that as the international community witnesses the facade of an “organized and peaceful elections”, the plight of the Cambodian people who were deprived of their right to genuine suffrage are not forgotten. We express our solidarity with our colleagues from the Cambodian civil society in their advocacy to promote elections which reflect the true will of the people.

True democracy is not reflected merely on the number of observers, media, or political parties participating political processes, but on the quality of engagement that each and every Cambodian enjoys.