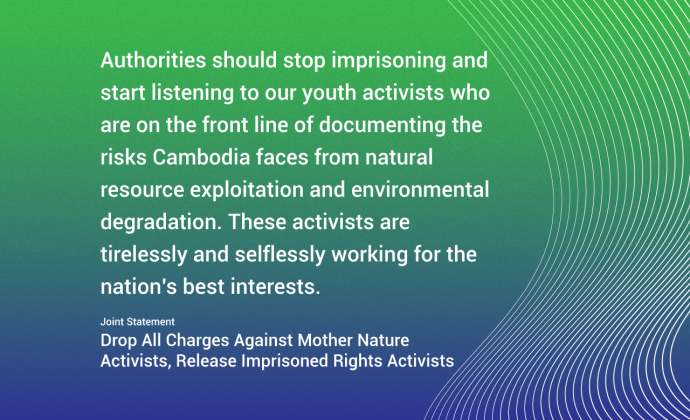 The Phnom Penh Municipal Court on Sunday charged four members of the Mother Nature environmental movement with plotting an attack against the state and insulting the king, part of the targeted and outrageous persecution of frontline environmental defenders and grassroots activists by the government. Authorities should stop imprisoning and start listening to our youth activists who are on the front line of documenting the risks Cambodia faces from natural resource exploitation and environmental degradation. These activists are tirelessly and selflessly working for the nation’s best interests.

We, the undersigned communities and civil society groups, demand the immediate release of the arrested environmental activists, dropping of all charges, and a halt to the relentless repression and prosecution of the environmental movement.

Sun Ratha, Yim Leanghy and Alejandro Gonzalez-Davidson were charged with plotting and insulting the king (lèse majesté) under articles 453 and 437 (bis) of the Cambodian Criminal Code, which carry maximum prison sentences of 10 years and 5 years, respectively. A fourth activist, Ly Chandaravuth, was charged with plotting.

Three of the activists were sent to pre-trial detention in Phnom Penh’s Correctional Centers 1 and 2 on 21 June, while Gonzalez-Davidson remains outside the country after he was deported in 2015.

Ratha and Chandaravuth were arrested on Phnom Penh’s riverside along with Seth Chhivlimeng, who was later released. The trio were documenting runoff from drainpipes along the river. At the same time, Kandal province’s Koh Thom district authorities summonsed environmental activist Yim Leanghy for questioning and arrested him, later transferring him to Phnom Penh. The whereabouts of the four activists were kept secret for at least 24 hours after their initial arrest, putting undue stress on their families and depriving them access to prompt legal counsel.

The three activists were then brought to the Phnom Penh Municipal Court and questioned by the prosecutor on 19 June and charged on 20 June, with the plotting and insulting the king charges leaked to pro-government media even before they were conveyed to the activists’ lawyers. This type of subterfuge undermines the activists’ right to a fair trial.

Their arrests are unfounded and the charges are baseless, and are yet another example of the Cambodian government and judiciary using trumped-up charges to imprison young human rights defenders. Advocating for human rights and demanding that the authorities protect the environment are not crimes, and jailing the country’s future generation of environmental defenders imperils us all.

The arrests come less than two months after the conviction of three other Mother Nature activists in May 2021, for baseless charges of incitement. Thun Ratha, Phuon Keoraksmey and Long Kunthea were convicted and sentenced to 18 to 20 months in prison for planning a one- woman march in Phnom Penh to advocate against the filling-in of Boeung Tamok, which has been carved out piecemeal to private interests and state institutions. Gonzalez-Davidson and another activist, Chea Kunthin, were also convicted in absentia.

In 2020, the government arrested at least 16 youth activists for protesting the detention of unionist Rong Chhun, who was arrested and charged with incitement for comments he made about the Cambodia-Vietnam border.

As overcrowded prisons across the country struggle with a COVID-19 outbreak, the government appears intent on arresting anyone who voices dissent or protests peacefully. The courts have shown little inclination to release people convicted for non-violent crimes early or on bail, but instead continue to incarcerate peaceful activists, putting their health at risk.

We demand that the members of the Mother Nature movement, and all environmental and human rights activists currently imprisoned, be released immediately and all charges against them dropped without condition.