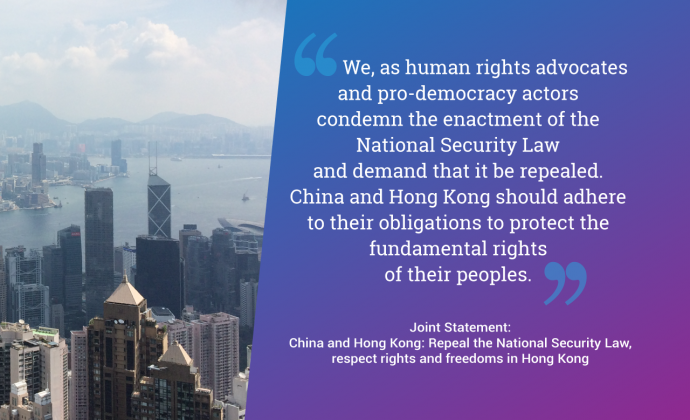 Posted by ANFREL With 0 Comment In Hong Kong, Statements

We, the undersigned 27 civil society organisations, are deeply concerned with the introduction of the National Security Law in Hong Kong. We call on the Governments of China and Hong Kong to repeal this law, which severely clamps down on the rights of the Hong Kong people.

A year after protests against the extradition bill rocked Hong Kong, its leaders have shown a complete disregard for the will of their peoples, and for the rights and freedoms they are obligated to protect, respect and fulfil.
On 30 June, China imposed the National Security Law in Hong Kong.[1] For Hong Kongers, it marked the beginning of an era where their democratic and the fundamental right to hold their government to account was being systematically undermined.

Vaguely defined political crimes in the law will allow state officials to target anyone, legitimising a system where the freedom of expression, including dissent, would be criminalised. The offences of subversion (Arts. 22-23), secession (Arts. 20-21), terrorism (Arts. 24-28), and collusion with foreign forces which endanger national security (Arts. 29-30) are punishable with life imprisonment.

Hours prior to its passage, Hong Kong’s Chief Executive Carrie Lam, at the UN Human Rights Council session, asked the international community to respect China’s rights to safeguard its own people’s national security, justifying the need for the law which would “target a small minority.”[2]

However, the law targets the entire civil society and facilitates a crackdown on civic space. It covers offences ‘committed against the Hong Kong Special Administrative Region from outside the Region by a person who is not a permanent resident of the Region.’[3]

It would enable state officials to conduct surveillance over people suspected of breaking the law. The law stipulates that non-governmental organisations and news agencies would be put under strengthened management, raising fears of intensified surveillance and interference by the State. The law compromises Hong Kong’s judicial independence, and it allows some trials to be conducted behind closed doors.[4]

The law spells the adoption of China-style authoritarianism over the city-state. Authorised by this security law, China has recently opened a national security office in Hong Kong which would collect intelligence in the city.[5] This security office would also have the power to send ‘complex’ cases to mainland China, nullifying earlier assurances by Lam that Hong Kong would not extradite cases to China.

The National Security Law effectively ends China’s promise of Hong Kong autonomy under “one country, two systems.” Its passage without the participation of the Hong Kong public demonstrates how hard-won freedoms and social movements are being attacked under the guise of national security. Within 24 hours of the law coming into effect, Hong Kong police arrested more than 300 protesters, over charges of illegal assembly and other offences.[6] Hong Kong’s pro-democracy political party Demosisto disbanded over fears of political imprisonment under this new law.[7]

We, as human rights advocates and pro-democracy actors condemn the enactment of the National Security Law and demand that it be repealed. China and Hong Kong should adhere to their obligations to protect the fundamental rights of their peoples.

We stand in solidarity with peoples of Hong Kong, who continue to fight for their rights and freedoms peacefully as they face unprecedented repression and violence.

We are further concerned that China’s influence to eradicate human rights extends beyond Hong Kong, and that the spaces in which communities are able to exercise their civil and political rights are systematically being eroded.

We reiterate the call to Hong Kong to commit to the protection of civic space and fundamental freedoms and push for a rights-based vision of national security.

This call is supported by the following organisations: