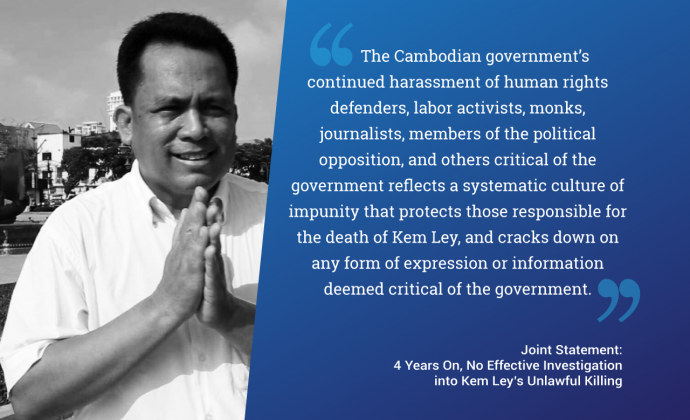 Today, on the fourth anniversary of the killing of prominent political commentator and human rights defender Kem Ley, we, the 30 undersigned organizations, call on the Cambodian authorities to create an independent Commission of Inquiry to conduct an effective and impartial investigation that is long overdue into Kem Ley’s death. We further urge Cambodian authorities to cease intimidation and harassment of persons peacefully commemorating his passing.

On July 10, 2016, Kem Ley was shot and killed while having his morning coffee at a petrol station in central Phnom Penh. Without conducting a prompt, thorough, and independent investigation, the authorities arrested Oeuth Ang, who identified himself as “Chuob Samlab” (meaning “Meet to Kill” in Khmer) and “confessed” to the killing. Following a half-day trial on March 23, 2017, which was widely criticized for failure to meet international fair trial standards, the court found Oeuth Ang guilty of murder and sentenced him to life imprisonment. On May 24, 2019, the Supreme Court upheld his sentence.

Since 2016, many international and domestic human rights organizations have consistently called on the Cambodian government to set up an independent Commission of Inquiry to conduct a prompt, impartial, and effective investigation into this killing, with emphasis on examining the potential criminal responsibility of persons other than the direct perpetrator, in line with international standards set out in the International Covenant on Civil and Political Rights (ICCPR). The UN Principles on the Effective Prevention and Investigation of Extralegal, Arbitrary and Summary Executions as well as the revised Minnesota Protocol on the Investigation of Potentially Unlawful Death reinforce the duty of governments to investigate unlawful deaths and to establish an independent commission of inquiry when states, like Cambodia, lack effective procedures to conduct such an investigation in accordance with international standards.

The Cambodian government, has to date, failed to take any steps towards the establishment of such an independent and impartial investigative body. Given the government’s unwillingness to conduct an independent investigation into Kem Ley’s killing, and civil society’s highly warranted lack of trust and confidence in Cambodia’s justice system which lacks the requisite levels of independence to adjudicate cases involving public officials, this body should be established under the auspices of the United Nations and composed of independent experts.

The Cambodian government’s continued antipathy towards Kem Ley’s case raise suspicions that he was murdered in retaliation for his work as a human rights defender. Kem Ley had often spoken on political and social issues. He was killed just days after he had spoken in an interview about an investigative report “Hostile Takeover”, released by the international nongovernmental organization Global Witness, which detailed widespread corruption in Cambodia tied to Cambodian Prime Minister Hun Sen and his family.

Soon after his death, Kem Ley’s then-pregnant wife and four sons fled Cambodia fearing for their lives. Australia granted them asylum after a barrage of threats to their lives while they hid without legal status for more than a year in Thailand.

Following the killing of Kem Ley, the Cambodian authorities have continually monitored, harassed, and ultimately disrupted and prohibited planned anniversary memorials of his death. Moreover, the authorities forced individuals wearing t-shirts with Kem Ley’s quotes or image to either remove them or cover them. These actions constitute arbitrary restrictions on the rights to freedom of expression and peaceful assembly. We condemn such attempts to stifle free speech and reiterate our call to the Cambodian government to stop such harassment.

In July 2019, a day prior to the third anniversary of Kem Ley’s death, the authorities arrested youth activist Kong Raiya alongside three family members for selling t-shirts with images of Kem Ley and two of his famous quotes: “Wipe your tears and continue your journey” and “Although you do nothing, you would still be victimized. It’s just a matter of time when it’s your turn.” While the police released his family members without charge after they signed “pledges” that they would desist from similar protest activities in the future, Kong Raiya remained in pre-trial detention on apparently politically motivated charges of incitement for nearly five months until the authorities released him on bail on November 28, 2019. On June 19, 2020, the Phnom Penh Municipal Court convicted Kong Raiya in absentia of “incitement to commit a felony” under articles 88, 494, and 495 of Cambodia’s Penal Code, and sentenced him to two years in prison, with the remainder of his sentence suspended due to time served in pre-trial detention. Kong Raiya was previously sentenced to 18 months’ imprisonment in 2015 on spurious incitement charges in relation to a Facebook post that criticized the government.

On July 10, 2019, the authorities arrested another student activist, Soung Neakpaon, for holding a sign reading “End extrajudicial killings” near the petrol station where Kem Ley was slain. The authorities charged him with incitement and placed him in pre-trial detention, where he remained until he was granted bail in November 2019. On December 4, 2019, the Phnom Penh Municipal Court convicted him in absentia of “incitement to commit a felony” under articles 494 and 495 of Cambodia’s Penal Code and sentenced him to two years in prison; he has not yet been re-arrested. On July 10, 2019, the authorities arrested twin brothers Chhum Huot and Chhum Hou for attempting to place flowers at the same petrol station. The authorities released them on the same day.

Ahead of the four-year anniversary of Dr. Kem Ley’s death Cambodian authorities already took restrictive measures to prevent peaceful commemorations of his passing. On July 8, 2020, police blocked a Buddhist ceremony held by a group of youth activists and monks at the petrol station where the murder had happened. The authorities detained one of the activists, wearing a t-shirt with Kem Ley’s face on it for questioning. The authorities released him after signing a ‘pledge’.

Kem Ley’s work and his life stood for building respect for civil, cultural, economic, political and social rights. He particularly emphasized the importance of people’s equal and free participation in politics, and the rights of every person to freedom of association, expression, information and peaceful public assembly. The Cambodian government’s continued harassment of human rights defenders, labor activists, monks, journalists, members of the political opposition, and others critical of the government reflects a systematic culture of impunity that protects those responsible for the death of Kem Ley, and cracks down on any form of expression or information deemed critical of the government.

We, the 30 undersigned organizations, will continue our call for an independent, impartial, effective, and thorough investigation into Kem Ley’s killing until all those responsible are brought to justice.