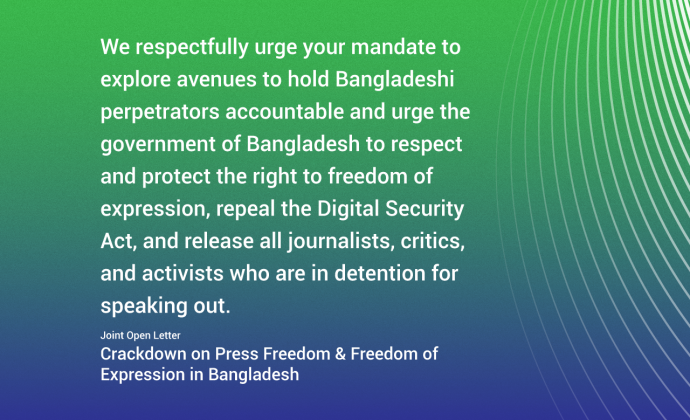 Posted by Campaign & Advocacy With 0 Comment In Bangladesh, Statements

RE: Crackdown on Press Freedom & Freedom of Expression in Bangladesh

On the occasion of World Press Freedom Day, we write to draw your attention to the escalating human rights violations perpetrated by the Bangladesh government, exemplified in part by the increasing crackdown on press freedom and the freedom of expression of journalists, activists, and dissidents.

We welcome your March 1 statement following the death in custody of writer Mushtaq Ahmed and torture of cartoonist Ahmed Kishore, which remarked on the “long-standing concern” over allegations of torture by Bangladesh’s Rapid Action Battalion (RAB), called for an “overhaul” of the draconian Digital Security Act (DSA), and urged the release of all prisoners charged under it.

In light of the continuing attacks on the media, we now respectfully urge you and other UN special mandates to engage in sustained outreach by publicly and vigorously expressing concerns over the situation of media freedom and using all means at your disposal to urge the Bangladeshi authorities to protect and respect freedom of expression.

Seven years ago, UN special mandates communicated with the Bangladesh government to bring attention to “the arrest of journalists and the adoption of disproportional punitive measures disrupting the activities of newspapers and televisions.” However, since retaining power in December 2018, the ruling Awami League party has taken an even tougher line with the media. With widespread repression of the media and the harassment of editors who publish reports critical of the government, journalists have taken to self-censoring at unprecedented levels given the risks of imprisonment or closure of media outlets.

In recent months, a number of journalists have been targeted for their work, and those who expose government corruption or express dissent are particularly at risk. At least 17 journalists were injured covering protests over the visit by Indian Prime Minister Narendra Modi in March 2021, a majority of whom were photographers. Demonstrators and police officers hit journalists with rifle butts, sticks, iron rods, stones, and bricks, and journalists were shot with rubber bullets resulting in various injuries including bruises, swelling, bleeding, broken bones, a dislocated shoulder, and a cracked skull. During these protests, there were also reports that Facebook and Messenger services were restricted in Bangladesh. In 2020, at least 247 journalists were reportedly subjected to attacks, harassment, and intimidation by state officials and others affiliated with the government.

Authorities continue to use the DSA to harass and indefinitely detain journalists, activists, and others critical of the government, resulting in a chilling effect on any expression of dissent. This overbroad cybercrime law, passed in 2018, effectively stifles journalism by criminalizing peaceful speech at the discretion of the government. More than 900 cases were filed under the DSA between January and December 2020; with nearly 1,000 people charged and 353 detained. Bangladesh authorities are poised to undertake even more prosecutions of DSA cases, as the Law Ministry has approved a proposal to expand the number of special tribunals specifically for these types of cyber “crimes.”

One such DSA case took place in October 2020, when Bangladesh police arrested journalist Ruhul Amin Gazi, a reporter with the pro-opposition newspaper The Daily Sangram in a case filed under the DSA for a news article published in 2019. Most recently, on April 20, 2021, Bangladesh police arrested Abu Tayeb, a Khulna journalist who works as a correspondent of the private TV channel NTV and a local correspondent of Dainik Loksomaj. He was arrested from his residence at night and charged under the DSA for an alleged Facebook post.

In light of these violations and the deepening trend they represent of silencing a free press, we respectfully urge your mandate to explore avenues to hold Bangladeshi perpetrators accountable and urge the government of Bangladesh to respect and protect the right to freedom of expression, repeal the Digital Security Act, and release all journalists, critics, and activists who are in detention for speaking out.

Download the PDF version of this joint letter here.