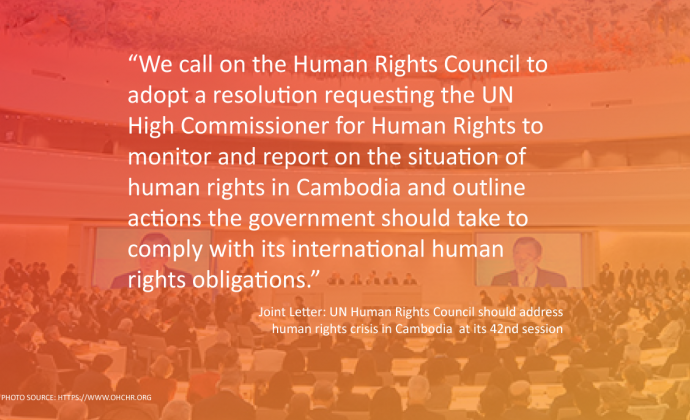 Re: UN Human Rights Council should address human rights crisis in Cambodia at its 42nd session

The undersigned civil society organizations, representing groups working within and outside Cambodia to advance human rights, rule of law, and democracy, are writing to alert your government to an ongoing human rights crisis in Cambodia and to request your support for a resolution ensuring strengthened scrutiny of the human rights situation in the country at the upcoming 42nd session of the UN Human Rights Council (the “Council”).

National elections in July 2018 were conducted after the Supreme Court, which lacks independence, dissolved the major opposition party, the Cambodia National Rescue Party (CNRP). Many believe that this allowed the ruling Cambodian People’s Party (CPP) under Prime Minister Hun Sen to secure all 125 seats in the National Assembly and effectively establish one-party rule. Since the election, respect for human rights in Cambodia has further declined. Key opposition figures remain either in detention – such as CNRP leader Kem Sokha, who is under de facto house arrest – or in self-imposed exile out of fear of being arrested. The CNRP is considered illegal and 111 senior CNRP politicians remain banned from engaging in politics. Many others have continued to flee the country to avoid arbitrary arrest and persecution.

Government authorities have increasingly harassed opposition party members still in the country, with more than 147 former CNRP members summoned to court or police stations. Local authorities have continued to arrest opposition members and activists on spurious charges. The number of prisoners facing politically motivated charges in the country has remained steady since the election. The government has shuttered almost all independent media outlets, and totally controls national TV and radio stations. Repressive laws – including the amendments to the Law on Political Parties, the Law on Non-Governmental Organizations, and the Law on Trade Unions – have resulted in severe restrictions on the rights to freedom of expression, peaceful assembly and association.

It is expected that a resolution will be presented at the 42nd session of the Human Rights Council in September to renew the mandate of the UN Special Rapporteur on the situation of human rights in Cambodia for another two years. We strongly urge your delegation to ensure that the resolution reflects the gravity of the situation in the country and requests additional monitoring and reporting by the Office of the High Commissioner for Human Rights (OHCHR). Mandated OHCHR monitoring of the situation and reporting to the Council, in consultation with the Special Rapporteur, would enable a comprehensive assessment of the human rights situation in Cambodia, identification of concrete actions that the government needs to take to comply with Cambodia’s international human rights obligations, and would allow the Council further opportunities to address the situation.

Since the last Council resolution was adopted in September 2017, the situation of human rights in Cambodia, including for the political opposition, human rights defenders, and the media, has drastically worsened. Developments since the 2018 election include:

The charges were based on baseless allegations of conspiring to commit treason and incitement to commit felony. In September 2018, authorities transferred CNRP head Kem Sokha after more than a year of pre-trial detention in a remote prison to his Phnom Penh residence under highly restrictive “judicial supervision” that amounts to house arrest. Cambodian law has no provision for house arrest and there is no evidence that Sokha has committed any internationally recognizable offense.

During 2019, at least 147 arbitrary summonses were issued by the courts and police against CNRP members or supporters. Summonses seen by human rights groups lack legal specifics, containing only vague references to allegations that the person summoned may have violated the Supreme Court ruling that dissolved the CNRP in November 2017.

In November 2018, Prime Minister Hun Sen stated that criminal charges would be dropped against all trade union leaders related to the government’s January 2014 crackdown on trade unions and garment workers in which security forces killed five people. However, the following month, a court convicted six union leaders – Ath Thorn, Chea Mony, Yang Sophorn, Pav Sina, Rong Chhun, and Mam Nhim – on baseless charges and fined them. An appeals court overturned the convictions in May 2019, but in July 2019 the court announced its verdict in absentia convicting Kong Atith, newly elected president of the Coalition of Cambodian Apparel Workers Democratic Union (CCAWDU), of intentional acts of violence in relation to a 2016 protest between drivers and the Capitol Bus Company. The court imposed a three-year suspended sentence, which will create legal implications under Article 20 of the Law on Trade Unions, which sets out among others that a leader of a worker union cannot have a felony or misdemeanor conviction.

In December 2018, Thai authorities forcibly returned Cambodian dissident Rath Rott Mony to Cambodia. Cambodian authorities then prosecuted him for his role in a Russia Times documentary “My Mother Sold Me,” which describes the failure of Cambodian police to protect girls sold into sex work. He was convicted of “incitement to discriminate” and in July 2019 sentenced to two years in prison.

In March 2018, the government enacted a lese majeste (insulting the king) clause into the Penal Code, and within a year four people had been jailed under the law and three convicted. All the lese majeste cases involved people expressing critical opinions on Facebook or sharing other people’s Facebook posts. The government has used the new law, along with a judiciary that lacks independence, as a political tool to silence independent and critical voices in the country.

In July 2019, authorities detained two youth activists, Kong Raya and Soung Neakpoan, who participated in a commemoration ceremony on the third anniversary of the murder of prominent political commentator Kem Ley in Phnom Penh. The authorities charged both with incitement to commit a felony, a provision commonly used to silence activists and human rights defenders. Authorities arrested seven people in total for commemorating the anniversary; monitored, disrupted, or canceled commemorations around the country; and blocked approximately 20 members of the Grassroots Democracy Party on their way to Takeo province – Kem Ley’s home province.

Attacks on Journalists and Control of the Media

Prior to the July 2018 election, the Cambodian government significantly curtailed media freedom, online and offline. In 2017, authorities ordered the closure of 32 FM radio frequencies that aired independent news programs by Radio Free Asia (RFA) and Voice of America. RFA closed its offices in September 2017, citing government harassment as the reason for its closure. The local Voice of Democracy radio was also forced to go off the air.

Social media networks have come under attack from increased government surveillance and interventions. In May 2018, the government adopted a decree on Publication Controls of Website and Social Media Processing via Internet and the Law on Telecommunications, which allow for arbitrary interference and surveillance of online media and unfettered government censorship. Just two days before the July 2018 elections, authorities blocked the websites of independent media outlets – including RFA and VOA – which human rights groups considered an immediate enforcement of the new decree.

Since then, Cambodian authorities have proceeded with the politically motivated prosecution of two RFA journalists, Yeang Sothearin and Uon Chhin. They were arrested in November 2017 on fabricated espionage charges connected to allegations that the two men continued to report for RFA after RFA’s forced closure of its Cambodia office. They were held in pre-trial detention until August 2018. Their trial began in July 2019 and a verdict on the espionage charges is expected late August. They face up to 16 years in prison.

The Cambodian government’s actions before and since the July 2018 election demonstrate a comprehensive campaign by the ruling CPP government to use violence, intimidation and courts that lack judicial independence to silence or eliminate the political opposition, independent media, and civil society groups critical of the government.

We strongly urge your government to acknowledge the severity of the human rights situation and the risks it poses to Cambodia’s fulfillment of its commitments to respect human rights and rule of law as set out in the Paris Peace Accords 1991. It is crucial that concerned states explicitly condemn the Cambodian government’s attacks on human rights norms and take steps to address them.

For these reasons, we call on the Human Rights Council to adopt a resolution requesting the UN High Commissioner for Human Rights to monitor and report on the situation of human rights in Cambodia and outline actions the government should take to comply with its international human rights obligations. The High Commissioner should report to the Council at its 45th session followed by an Enhanced Interactive Dialogue with participation of the Special Rapporteur on Cambodia, other relevant UN Special Procedures, and members of local and international civil society.

We further recommend that your government, during the Council’s September session, speaks out clearly and jointly with other governments against ongoing violations in Cambodia.

We remain at your disposal for any further information. With assurances of our highest consideration,

Click on the link to download the joint letter: “Joint Letter: UN Human Rights Council should address human rights crisis in Cambodia at its 42nd session"