Indonesian Elections: Need for Calm in Face of Claims of Victory by Both Presidential Camps

Presidential Polling in Indonesia on the 9th of July went smoothly and was thankfully free from major incident. The voters freely exercised their political rights across the nation with the exception of polling stations in the area of Yahukimo mountain due to a delay in the delivery of logistics materials due to weather disturbances. The elections commission, security officials, political parties, and of course voters who were committed to make a peaceful environment deserve appreciation, as observers witnessed high voter turnout across the nation.

Despite the success of the polls, concerns after the close of polling grew rapidly due to results of the  quick count polls conducted by 11 (eleven) survey groups showing conflicting figures and, in some  cases,  victories for both the Jokowi-JK and Prabowo political camp. Although the official results will  only be  announced on 22 July 2014, both the Jokowi and Prabowo camps have each already claimed  and  declared their respective victory. Tensions rose quickly between the rival political camps and  their media  war continues to create confusion in society during the post-election period. To reduce  the tension, and  provide clarity to society, the Chief of the Elections Commission (KPU) Husni Kamil  Manik explained  the official process and called on all parties to respect the process and refrain from  making provocative  actions in order to maintain societal order.

The President of the Republic of Indonesia, Susilo Bambang Yudhoyono (SBY), who monitored the situation, also came on-air to call on both parties to remain calm, respect the recapitulation process of the KPU, and order all supporters to stop their victory rallies to avoid confrontation. Further, SBY also called both Presidential candidates to his official residence for further consolidation and to maintain the peace and unity of the state.

Ichal Supriadi, the Executive Director of ANFREL Foundation who witnessed the polls, expressed his appreciation for the quick action made by Husni Kamil Manik, the chief of the KPU to provide clarity and the quick response of President Susilo Bambang Yudhoyono to use his position to try to impress upon both political rivals the need for calm. The actions above, and moves made by the political candidates should they cooperate, can ease tension between supporters, and build support for and peaceful acceptance of the coming official result from the KPU. Mr. Supriadi also believes that the parties should respect the rule of law, address complaints and disputes through the appropriate channels for electoral dispute resolution in the country and avoid the use of violent and destructive means of protest. Indonesian democracy will gain significant appreciation and progress to another level of maturity if it can pass this round of elections peacefully.

Mr. Supriadi, and the ANFREL network as a whole, congratulate the people of Indonesia for their achievement, and appreciate the significant contributions made by Indonesian Civil Society to enhance the peoples’ participation in these elections. 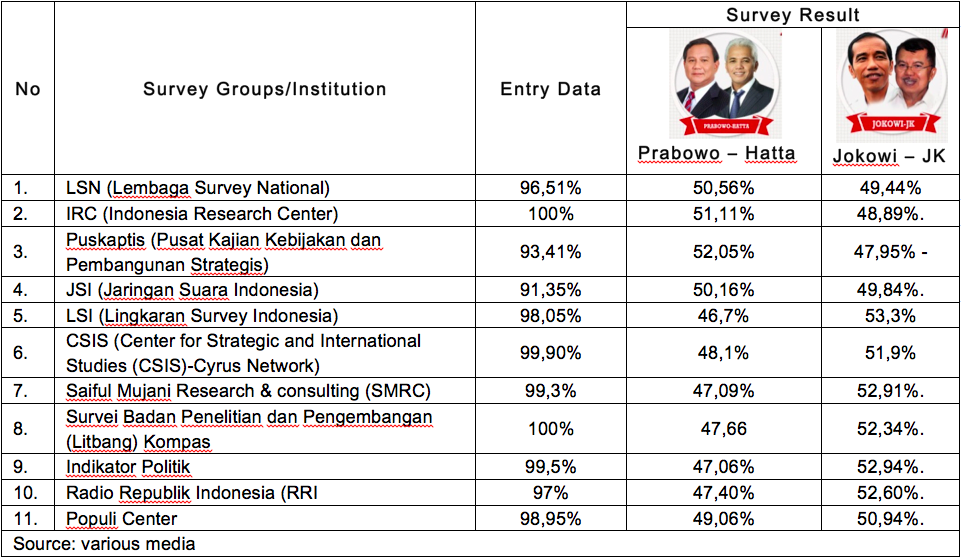