Hope, Not Fear: Exemplary Courage Shown by the Voters of Afghanistan 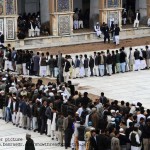 Hope, Not Fear: Exemplary Courage Shown by the People of Afghanistan

KABUL, 08 APRIL 2014 – The Asian Network for Free Elections (ANFREL) Foundation wishes to enthusiastically commend the people of Afghanistan for their participation in the 05th of April’s Presidential and Provincial Council Elections. ANFREL’s respect and admiration goes to those determined voters who voted despite the obstacles and threats facing them. If and when Afghanistan becomes a mature democracy, it will do so based on a democratic foundation laid by Saturday’s voters.

The Independent Election Commission (IEC) of Afghanistan and its staff are also, generally speaking, deserving of praise for their management of the election to date in very difficult conditions. There is of course a long way yet to go in the electoral process and much of their most important work is still to come but the general performance of the IEC up to and through Election Day despite many attacks on their staff and offices appears praiseworthy. To maintain the generally positive impression left by their performance on Election Day however, it is imperative that the final tabulation and consolidation of votes as well as the verification of the vote totals be done in a timely, transparent, and professional manner.

While ANFREL condemns all electoral violence and finds even one incident during the pre-election period or Election Day to be regrettable, very early reports indicate that there was less election related violence on this Election Day than during the last Presidential and Provincial Council Elections in 2009. Much of the credit for this improvement rightly goes to the Afghan National Security Forces (ANSF) who by and large performed professionally and bravely in the face of repeated attacks. They also deserve credit for the improved voter turnout, an encouraging statistic that is likely at least partially due to people’s increased confidence in the security provided for the polling.

Given the generally professional performance from Election Day itself, the IEC must see through the rest of the process, including aggregation and verification of vote totals, in a neutral, open and transparent manner consistent with existing legal provisions. The IEC’s central role makes its doing so absolutely vital until all election results are finalised, through and including results from a possible Presidential runoff. Doing so will increase public confidence in the election while failure to do so would undermine much of the election and IEC’s progress to date.

Where irregularities come to light or complaints are made, both of which are inevitable, the Independent Electoral Complaints Commission(IECC) must investigate in an impartial, transparent, thorough, and timely manner. After findings of fraud or illegal activity, it is important that the perpetrators of such acts are punished in accordance with the law and in a way that will deter future misdeeds. Without proper dispute resolution and the electoral justice such a process provides, not only will the current election’s integrity be damaged, fraud will grow in future Elections due to a perceived lack of consequences and punishment for electoral fraud or malfeasance.

“While there is much to praise about Election Day itself, it is crucial to remember that Elections are made up of far more than what happens on Election Day alone. Polling Day is but a step in the overall Electoral Cycle, ANFREL Chairman Damaso Magbual noted. He continued, “At this point in the post-election period in Afghanistan, when counting and verification of results are still in their early phases, there exists a great need for continued vigilance and monitoring of the counting and consolidation processes on behalf of the public, the IEC, the Independent Electoral Complaints Commission (IECC), the media, Election Monitors such as FEFA and TEFA, and the election candidates themselves.”

There were some areas of concern like ballot papers running out in a number of polling stations, which likely prevented some voters from exercising their franchise. Competing camps blame this shortage on a number of factors but considering that polling stations still do not rely on voter lists, this is to be somewhat expected. That fact, combined with the possibility of voters choosing polling stations based on their perceptions of which are safest due to security concerns, could create a glut of voters at certain popular polling stations. Still, a thorough and timely investigation of polling stations where ballots ran out is necessary to determine why each ran out to uncover any possible frauds and to improve the IEC’s estimate of ballots needed before each election, including any possible runoff round of this election.

For a longer term and more robust solution, it is strongly recommended that a list of voters is prepared for each polling station so an individual is linked or assigned to a specific polling station which is more or less permanent. This can be arrived at after an accurate polling station mapping that determines where a voter will cast his vote based on his residence.

Regarding political actors accepting election outcomes, ANFREL is encouraged by various candidates promising that they will accept the outcome declared by the IEC and hopes that they actually do so when results are announced. Similarly, candidate’s premature and unfounded declarations of victory can create an unrealistic expectation among supporters that often turns into claims of being cheated when their candidate fails to win. On this matter, patience is a virtue and the ability to admit defeat graciously and agree to contest again in a future election, to not treat elections as a winner take all game, is an admirable, much needed trait that should be encouraged.

ANFREL has been working for free and fair Elections in Afghanistan since 2004 and hopes to continue to see electoral progress in the country going forward. ANFREL hopes that the relatively successful Election Day can build momentum towards a national consensus surrounding Elections as a primary means of power sharing and the essential tool for transfers of power. Through the continued determination of the Afghan people and their election related agencies, determination such as that shown on April 5th, Afghanistan can move forward towards a more democratic society with respect for the rule of law, human rights and greater economic opportunity for all.