The award presentation was preceded by a panel discussion on “Examining the Transition to Democracy in Burma” featuring both Min Ko Naing and fellow Burmese activist, political prisoner, and leader of the 88 Generation Ko Ko Gyi, moderated by NED Senior Director for Asia and Global Programs Brian Joseph.

In September 2012, when NED originally honored four activists representing the democracy movement in Burma with its annual award, Min Ko Naing, one of the recipients, stayed in Burma to demonstrate solidarity with other activists who had not yet been granted passports by the Burmese government.

“Burma is one of the great stories of the modern struggle for democracy,” Carl Gershman said. “If we’ve come as far as we’ve come [in Burma], it’s because of courageous civic activists” like Min Ko Naing.

In a wide-ranging discussion, Min Ko Naing and Ko Ko Gyi spoke about their experiences each spending nearly 20 years as political prisoners in Burma, the role of the 88 Generation in Burma’s transition, and the challenges that remain to democracy in the country.

“We believe that civil society is the foundation of democracy,” Min Ko Naing said. New policies and reforms in Burma will need to pass through the Parliament but will also require changes in the community, so the role of civil society is complementary and equally important, Ko Ko Gyi explained. The 88 Generation is working to strengthen civil society and educate the Burmese public about their rights. 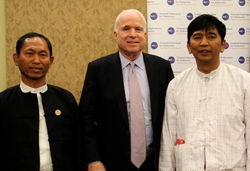 Senator McCain praised Min Ko Naing and Ko Ko Gyi for providing hope and inspiration for Burma’s democracy movement, but also noted that the democratic transition in Burma was still ongoing. He said, “there’s a lot of work to be done to ensure Burma stays on the right path. This cause lives on in the work and legacy of great freedom fighters like Min Ko Naing whom we honor today.”

Representative Crowley agreed, and called for the United States to maintain a “carefully calibrated” approach to Burma. He warned that overstating the positive changes and successes of the democratic transition in Burma risks overlooking the important challenges that still remain, including the issue of Burma’s ethnic nationalities who “need to feel like they have a future in the country.”

Brian Joseph asked Min Ko Naing and Ko Ko Gyi, as two of the leading moral figures in the country, to speak on the increasingly important issue of ethnic and religious pluralism in Burma and the recent outbreak of communal violence in the country. Both men spoke about the importance of tolerance and of rejecting hate speech and violence. Min Ko Naing said that he is working with leaders from all religious communities to stop the violence together and prevent future conflict. “We don’t want to allow the hate language among the different groups,” Ko Ko Gyi said, “We tried to make harmony between the different religions and the different communities. That is our goal and objective. Without stability, we cannot achieve democracy and development.”

Presenting the Democracy Award to Min Ko Naing, Gershman described Min Ko Naing’s role as a leader of the Burmese democracy movement, beginning in 1988 when he organized the All Burma Federation of Student Unions to lead a general strike in protest of the military government.

“I want you to know that you actually have achieved your goal. You have liberated your people and for that we honor you,” Gershman said.

Pelosi congratulated Min Ko Naing for his “courageous efforts to promote democracy and human rights in Burma” and praised the Endowment for its leadership in “placing before the eyes of the American people the courage and plight of the people of Burma.”

Accepting the award, Min Ko Naing thanked the NED and the U.S. Congress for their consistent support of the democracy movement in Burma. “It was surely a fact that the international recognition and unyielding support serve as a great spiritual encouragement to those who are fighting for freedom at one corner of the world,” he said.