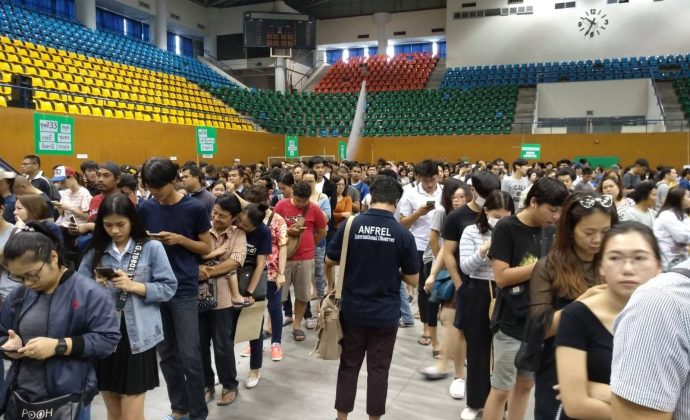 Posted by Campaign and Advocacy With 0 Comment In Statements, Thailand

In a remarkable expression of their faith in democracy, eighty-seven percent of Thai voters registered for advance voting turned out to vote. Advance Voting Day remained peaceful and orderly but punctuated by instances of mismanagement, inconsistencies in the application of electoral rules by polling staff, and complaints of inadequate voter education and information in particular to voters and political parties.

While the Advance Voting Day establishes the preparedness of the Election Commission of Thailand (ECT), it has provided the Commission an opportunity to immediately take measures to rectify the management issues reported by election stakeholders. The ECT must ensure that the polling staff are consistent in the application of electoral rules on the Election day and would do well by initiating large-scale voter information and education campaign utilizing various media to fill up for any public information deficit that has been identified on Advance Voting Day.

This ANFREL report is based on the observation of 15 Short-Term International Observers deployed in 10 provinces in Thailand. These observers are part of the International Election Observation Mission duly accredited by the ECT. Extensively trained to assess the technical aspects of the electoral processes, ANFREL observers visited 27 polling centers and observed the polling process to assess their conformity and compliances with the electoral procedures notified by the ECT. In addition, the observers also interviewed voters, party agents and representatives of local election monitoring groups. Under the defined methodology, ANFREL observers were also required to speak to the polling staff, but due to unclear instructions from ECT personnel at some centers, they refused to talk.

Reports from ANFREL observers suggest that the voting process at the polling centers was generally open and organized. No major incidents of violence or electoral violations were reported to have occurred at the polling stations. However, underneath the largely peaceful completion of the advance voting day, there were instances of inconsistencies and irregularities that surfaced in the observations of ANFREL observers, which also warrant ECT’s immediate attention.

Many polling stations mainly in Bangkok and other major cities were found to be overcrowded, causing hours of waiting in queues for voters. It is worth mentioning the deployment of several staffs at polling stations with the high number of registered voters to assists them in giving relevant information on the advance voting day. However, this arrangement was not sufficient as ANFREL observers met several voters returning without voting. There were cases of voters whose names did not appear on the list despite registering for advance voting online. According to some local election monitors, these missing names were caused by voters not properly accomplishing the online registration process. Measures to ensure non-occurrence of these issues on the Election Day needs to be tackled urgently by the Commission. This will prevent any possible cases of voter disenfranchisement on election day.

ANFREL encourages the ECT to provide information to the public on voting procedures to provide clarity on the proper conduct of the process. Variances in the implementation of electoral regulations at different polling stations were also witnessed. For instance, taking photographs outside the polling booths was reported to be permitted in most stations, but at some polling stations, it was restricted. An ANFREL observer was asked by an on-duty police officer to delete photographs that were taken at the booth. Furthermore, such uneven implementation was also reflected in the information posted on the notice board outside polling booths, as some contained information regarding political party candidates while others did not.

We regret the limited presence of political party agents and citizen observers on the advance voting day at various polling stations we observed. The presence of these stakeholders in all stages of the electoral process adds to the transparency and credibility of elections. Thus, we call upon the ECT to take immediate measures to ensure that the political party agents and observers are not unduly restricted by polling station staff from observing the voting and counting processes on Election Day.

The media reported that the Election Commission has admitted cases of polling stations handing out ballots for the wrong constituency to voters. A more careful ballot distribution process has to be made in order to avoid such occurrence, thereby avoiding confusion among the voters and removing any unfair benefits to some political parties. The ECT should produce clear guidelines on how such cases should be resolved, and how to appreciate the votes in the wrong ballots, as well as accommodate those who were not able to cast votes in the polling booths with wrong ballots.

ANFREL strongly urges the ECT to conduct all aspects and phases of the electoral process in a more transparent manner. Civil society groups including local election monitoring groups interviewed by the mission expressed that they were not provided with information regarding the electoral process prior to the advance voting day. As a result, concerns surrounding the security of ballot boxes, transfer, sorting and storage of ballots poured in immediately after the polling stations closed. The Election Commission only addressed the concerns of the public a day after the advance polls. The management body released the measures undertaken to ensure the ballots’ security from potential tampering during the transfer and while in the custody of the postal service or at police stations. The public’s widespread concern about the security of ballots reflects poorly on the public’s level of confidence on the ECT, which is induced mainly by the lack of information.

On Sunday, March 24, tens of millions of voters will go to the polls across the country. The electoral inconsistencies observed during the advance voting day require urgent attention by the ECT in an effort to improve the quality of voting and counting processes on Election Day. In addition, while recognizing the limited time remaining before the polling day, ANFREL recommends that the ECT provide clearer electoral information to voters as soon as possible.

ANFREL highly recommends for the ECT to urgently address the public’s concerns surrounding the electoral process, especially events of mismanagement on the advance voting day, including widespread concern over transparency, especially in regards to ballot security. ANFREL calls upon the ECT and all related stakeholders to uphold and protect the Thai people’s electoral rights and reward their continued faith in democracy in this 2019 general election.