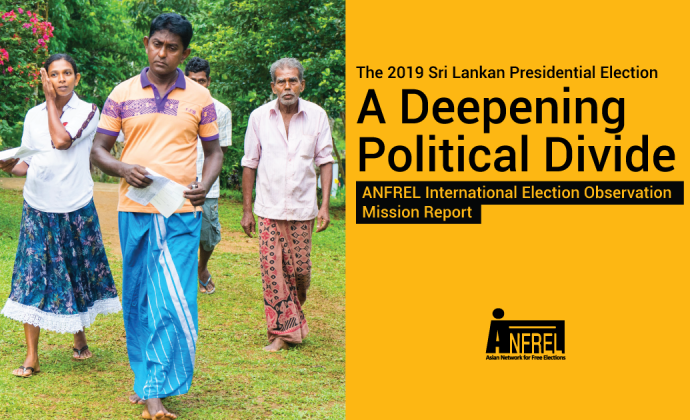 Posted by ANFREL With 0 Comment In Mission Reports, Sri Lanka

On January 31, 2020, the Asian Network for Free Elections (ANFREL) released its comprehensive assessment on the conduct of the 2019 Sri Lankan Presidential Elections.

The Eighth Presidential Election was held on November 16, 2019 under the framework of the 1978 Constitution Democratic Socialist Republic of Sri Lanka. The election was successful, largely peaceful and orderly. The Election Commission of Sri Lanka (EC) needs to be particularly acknowledged for delivering on its constitutional mandate to ensure an electoral process that has drawn confidence of people and political parties alike. The resounding success of the election was due to the acceptance of the election outcome by all contesting parties in a welcome demonstration of democratic maturity, yielding a quick and swift transfer of power.

Through the deployment of international election observers throughout the country, the mission witnessed how the Sri Lankan people emerged and participated in deciding the future of their country. This report presents ANFREL’s final assessment of the electoral process, which was crafted with internationally recognized democratic election norms and principles in mind.

The 83.72% voter turnout shows the reinforcement of public faith in the ballot and the prospects of change it can bring. Therefore, it is necessary that all issues both observers and voters saw emerging from the process be addressed immediately in order to continue and strengthen public trust in elections. Of the 15,992,096 registered electors, 13,387,951 went out to exercise their suffrage rights. While laudable, ANFREL would like to recommend that a more thorough voter and civic education initiative could be done to improve this number in future elections.

Despite some procedural inadequacies such as insufficient safeguards to protect voters’ secrecy, generally unclear definition of the role of police officials inside polling stations and differential understanding of election officials on handling tendered and spoilt ballots, the voting process on Election Day ran smoothly. However, the smoothness of the process was not felt by all voters. Almost all polling stations observed by ANFREL observers posed accessibility challenges to persons with disability (PWD), especially wheelchair-bound and elderly voters. ANFREL recommends to the EC, relevant government agencies, and electoral stakeholders including civil society organizations (CSOs) to pay required attention to creating a more enabling environment for particularly elderly voters and PWDs.

The campaign environment was dominated by only four major candidates in a field that had 35 contestants. Such dominance was further aggravated by the incessant and uncontrolled spending of several candidates in both traditional and social media. Given the lack of legal framework to monitor and control campaign spending by political parties and private campaigners, the playing field is heavily tilted towards moneyed candidates. ANFREL recommends to the Sri Lankan Parliament to consider an immediate passage of campaign finance laws to make elections more inclusive to candidates representing diverse income groups. In addition, the EC may also consider measures to prevent candidates supporting the candidacy of their opponents, which Sri Lanka has seen in this election.

The political parties utilized both traditional and non-traditional campaigning methodologies. The media, both public and private, were perceived by most stakeholders to have been biased towards their preferred candidates and parties. The media and political parties’ relations are so entangled in a sense that media institutions are oftentimes owned by personalities who are closely affiliated with political parties. Such biases should be avoided in future elections ideally through an initiative of media entities to police themselves and their members to ensure the fulfillment of the right of voters to have access to unbiased information about election contestants and their manifestos. Social media also played host to a lot of issues which include hate speech, misinformation, and disinformation, contributing to the negative discourse which adversely affected the electoral environment. It is recommended for the EC to continue its partnerships with the different online platforms to develop programs and policies that would curtail effects of hate speech, misinformation and disinformation in future electoral exercises.

ANFREL observers found the postal voting process to be peaceful and orderly. This exercise can be further improved by expanding the privilege to similarly situated government employees and private individuals. In addition, the location of these postal voting stations should be assessed further to make it more conducive to voters who are eligible to avail this facility. Furthermore, ANFREL would like to recommend addressing the lack of legal framework and alternative voting procedures for sectors which are currently disenfranchised, specifically remand prisoners and migrants who are studying or working outside of Sri Lanka.

Sri Lankan voters seem to possess the basic knowledge about elections but largely unaware of the complexity as well as advantages of preferential voting. Most of the voters interviewed by the mission relayed that they only know how to vote for only one candidate. Such basic knowledge deprives voters the opportunity to fully exercise the full breadth of their voting rights, specifically voting for more than one candidate, which all eligible Sri Lankan citizens are legally given. Hence, the EC should strive to provide more comprehensive voter education to the Sri Lankan voters. Local election organizations should also take it to task to provide voter education to people in the peripheries, and not just focus in urban areas.

Although the November 16 Presidential Election showcases the positive developments in the conduct of future elections in the country honed through years of compromise and cooperation among various election sectors, further improvements can be made to make the electoral process more inclusive, transparent, and accountable to inspire even greater confidence of diverse communities that inhabit the island.