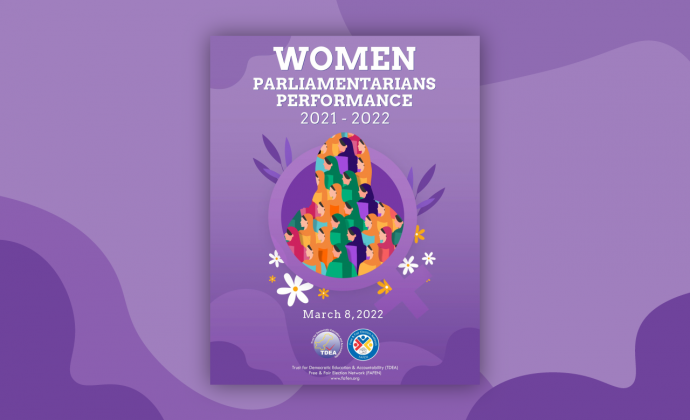 ISLAMABAD, March 8, 2022: Undeterred by under-representation and neglect, female parliamentarians upheld their tradition of proactively and assertively performing their legislative, representative and oversight functions in both Houses of the Parliament during 2021-22. This has been observed in Annual Women Parliamentarians Performance Report 2022 released by Free and Fair Election Network (FAFEN) on the occasion of International Women’s Day.

Constituting one-fifth of the Parliament, they accounted for nearly 35 percent of the parliamentary agenda during 2021-2022 – 38 percent in the National Assembly and 25 percent in the Senate. This year’s contribution by female parliamentarians is their highest annual contribution since the 15th National Assembly took oath in 2018. They had sponsored 33 percent parliamentary agenda in 2018-19 and 2019-20 each, and 28 percent agenda in 2020-21.

Despite female parliamentarians’ remarkable contributions, their agenda continued to be neglected in the Parliament. Nearly a fifth (19 percent) of the female MNAs’ agenda and six percent agenda by female Senators either lapsed or remained unaddressed during the reporting period. With the exception of parliamentary questions, the percentage of unaddressed legislative and representative agenda goes as high as 55 percent. More than two-third of the calling attention notices (CANs), more than half of the private members’ bills, and all of their private members’ resolutions, motions for public interest discussions, and proposals for amendments to Assembly and Senate Rules either lapsed or are still pending. Unlike the National Assembly, the Senate appeared to be more responsive to female parliamentarians’ agenda. However, the female senators’ motions for public interest discussions (including motion under Rule 218 and Adjournment Motions) in the Senate remained unaddressed.

On an average, each female MNA contributed 10 agenda items to the Assembly’s Orders of the Day against five by a male MNA. Similarly, each female Senator contributed nine agenda items to the Upper House’s Orders of the Day against an average of seven by each male Senator. All female parliamentarians – except four MNAs and one Senator – actively participated in their respective House’s proceedings.