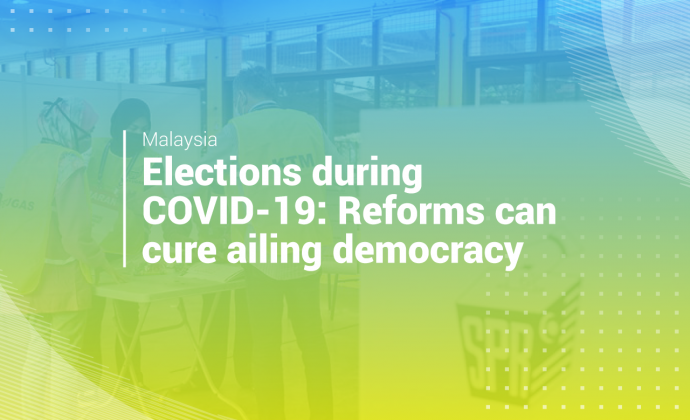 First published on Malaysiakini on 30 January 2022, "Elections during COVID-19: Reforms can cure ailing democracy" was produced under the ANFREL Southeast Asia Media Fellowship on Election Reporting.

These reforms would make casting the ballot easier for the coming general election, which is expected to be held within the next two years.

Now, with the dissolution of the Johor state assembly, the reforms are much more urgently needed.

Although the authorities implemented health safeguards during the past elections, the administration of the polls, however, compromised democracy and the principle of universal suffrage.

SVAs are designed to expand voting opportunities to those who are otherwise unable to vote and thus facilitate the principle of universal suffrage.

Voter turnout is often used as one of the yardsticks to determine an election's legitimacy.

Speaking to Malaysiakini, a Sarawak voter based in Kuala Lumpur, who wished to be known only as K, recalled she decided against casting her ballot in the state polls, which was held a week before Christmas, on Dec 18.

"I did not want the Covid-19 cases to spike again like what happened after the Sabah election," she said.

Her concern is understandable since cases in Malaysia witnessed a sharp uptick after the Sabah polls in September 2020, which resulted in fresh lockdowns.

Apart from Covid-19, K said the expensive airfare and tight work schedule ahead of the Christmas holidays also discouraged her from returning to Sarawak for the polls.

"But if the government makes it (the election process) more friendly for us (voters), I think I would go back and vote as this is everyone's responsibility.

"The flight charges and the time to travel, especially to rural areas, are among the factors that discourage us," added the Batu Kitang constituent.

For political party member Chiew Choon Man, who is also based in Kuala Lumpur, he had no choice but to book a longer flight, which saw him transit in Labuan before departing for Miri.

The longer trip, he said, was easier on the wallet, costing around RM400 as opposed to a direct flight to Miri, which would have been in the region of RM1,500.

"Despite airfare being reduced soon after, many of my friends, as well as my younger brother who works in the Klang Valley, still did not bother to go back and vote," he told Malaysiakini.

Chiew is the Sarawak PKR Youth deputy chief. He was also the election agent for the PKR candidate in N72 Lambir, a semi-urban constituency in Miri.

Travel cost has been a protracted issue for Sabah and Sarawak voters, who work in the peninsula or neighbouring countries, costing at least a few hundred ringgit per trip.

When the pandemic began, the Election Commission (EC) allowed Malaysians who resided in neighbouring countries to register as postal voters for both the Malacca and Sarawak elections.

However, this option was not extended to those within the country despite calls for reforms from various civil rights groups and parliamentarians.

In early December last year, the government stated its refusal to broaden the postal voter base due to resource and logistic issues.

Elections should not be a 'privilege'

Sarawak civil rights group Rise of Social Efforts (Rose) president Ann Teo said the EC's refusal to provide SVAs for this group of voters is one of the reasons for the low turnout.

"Absentee voting must be implemented urgently. We all know very well that the problems existed even before Covid-19. The pandemic just compounded the problem.

"When GE15 comes, the same thing will happen. People will still continue to live and work in either west Malaysia or some in Sabah," she said, referring to Sarawak's outstation voters.

The suggestion to broaden the postal voter base first arose in August 2020 following the dissolution of the Sabah state legislative assembly.

At the time, former EC secretary Kamaruzaman Mohd Noor said the commission has the jurisdiction to expand the postal voter base under the current electoral regulations, and there is no need for the government to amend the existing laws or the Federal Constitution.

However, the suggested reforms continued to fall on deaf ears.

Currently, there are only seven categories of groups that are eligible for domestic postal voting: the military, police, media personnel, election officials, Malaysian citizens abroad, as well as students and civil servants who are abroad.

Teo, who is also the Sarawak Bersih vice-chairperson, stressed that EC should seriously look into the absentee voting method, whether postal voting or advance voting.

"Of course, the latter option will cost more but democracy should not be something cheap.

"If you want to give people access to the right to vote, with the unequal development in Sarawak and Sabah, the election process should be more accessible, no matter if it is a state or general election.

"Now it (voting) has become a privilege. Only privileged voters who can afford to come back can vote. This makes a mockery of democracy and our basic civil rights," she added.

DAP's Kuching MP Kelvin Yii shared the same view, stating that broadening the absentee voter base is one of the efficient ways to encourage voter participation, and cost should not be an excuse.

"The right to vote is a universal right for everyone regardless of economic status… If the government believes in empowering the people, they should invest in democracy," he said.

Last December, Yii tabled an emergency motion in the Dewan Rakyat to debate the need to implement reforms that would make it easier and safer (due to the pandemic) to vote in an election.

However, the government indicated it does not have enough time or resources to implement these reforms.

Noting the late announcement of the standard operating procedure (SOP) for the Sarawak election, Yii said the EC failed to hold a free and fair election for all.

"This is something the EC has failed to implement.

"They have been through (the pandemic) for at least two years. They would have learned what needs to be strengthened and polished," he added.

Meanwhile, the Malaysian Council of Professors senior fellow Prof Dr Jeniri Amir suggested that the EC should look into various methods of absentee voting, including online and advanced voting.

He noted that the last Sarawak election recorded the lowest turnout in history, with the second-lowest being the 2006 state polls at 63.22 percent.

"The EC should open up as many options as possible. Do not complicate things. Make it easy for voters to fulfil their rights.

"So it is important for us to ensure a higher voter turnout. Let more people participate in the process of choosing their government," he urged.

He said the underdevelopment of basic infrastructure in rural areas and poor public transport in Sarawak conveniently become the reasons for political parties to offer "incentives" or "transport allowance" for voters, especially in rural areas.

"It is an open secret. For me, the transport allowance should be given officially and directly by the government to eligible voters, not on a political party basis. It should not be a vote-buying system," he said.

Yii opined that a high voter turnout would lessen election fraud and vote-buying.

"This is because you cannot 'buy' all the people," the MP added.

To address EC's shortcomings, Yii said the commission should report to Parliament instead of the Prime Minister's Department (PMD).

"EC's main task is to ensure a free and fair election, which can be participated in by as many Malaysians as possible even though we are in a pandemic now.

"It should not be about giving advantages to certain political parties… If they continue to report to the PMD, then political considerations will always be in place," he added.

Now, given that the Johor state election will be held soon, the EC is urged to open up the overseas postal voter registration as soon as possible.

The incumbent Mengkibol state assemblyperson Chew Chong Sin said this is to make sure that EC officers have ample time to handle registration.

He also suggested that the EC set up voting stations in Malaysia's embassy in Singapore, given that a large number of Malaysians are working in the island republic.