Posted by admin@anfrel.org With 0 Comment In ANFREL News, Sri Lanka

As Sri Lanka plans to hold a snap presidential election on 8th January next year, speculation grows about President Mahinda Rajapaksa's quest for an unprecedented 3rd term after the defection of several key ministers as well as the announcement that the General Secretary of his party, Maithripala Sirisena, would be the "common candidate" supported by a coalition of opposition parties to run against President Rajapaksa.

The election comes only four years into the President's six-year term. President Rajapakse's attempt for a third term is possible due to a 2010 constitutional amendment which removed the two term limit. The final day of the nomination period is the 8th of December.

At present, opposition politicians and critics of the early election have argued that holding the election so early is a violation of the Constitution. The two main opposition political parties sought legal remedies for what they claim is an unconstitutional poll, arguing that the “President cannot contest for a third term and a presidential election cannot be called in only four years”. However, the Supreme Court of Sri Lanka dismissed the case, finding that the early election does not violate the Constitution. 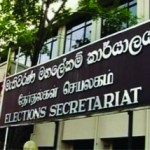