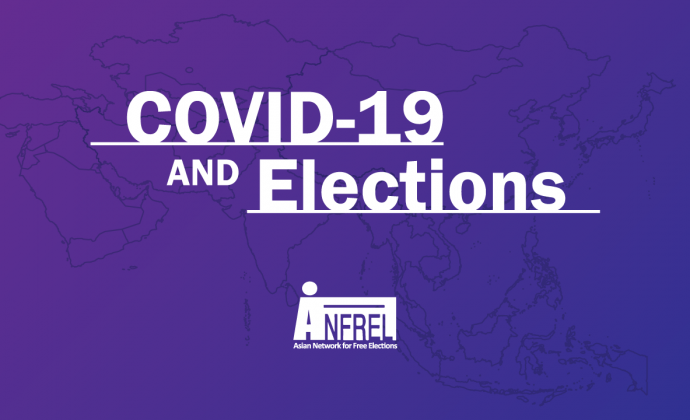 Posted by ANFREL With 0 Comment In ANFREL News, South Korea

The COVID-19 pandemic has disrupted the everyday life of people around the world affecting their livelihood and restricting freedoms they enjoy. Several countries have also postponed their scheduled elections in light of the current situation but on 15 April 2020, South Korea proceeded with its legislative election in what the world now looks at whether or not holding elections amid the crisis is a viable option.

The Asian Network for Free Elections (ANFREL) interviewed Ms. Soo Suh, program manager of the Asia Network for Democracy, and asked for her insights about how South Korea handled the election.

"There were some people who feared that it could be dangerous but the will of the citizens to cast their votes was stronger," Ms. Soo Suh said when asked about the people’s sentiment on moving forward with the election despite the looming threat of COVID-19. “It was more of the government's role to ensure a process where they could come safely to vote."

She said there were public concerns in the beginning but South Korea being a young democracy, bringing up the topic of postponing the election was a controversial statement where a lot of people avoided.

As observed, during the campaign period, many of the parties avoided converging huge crowds and campaigns moved online as soon as the crisis became more evident. Ms Soo Suh said there were not many restrictions on campaigning but the parties heeded social pressure in avoiding the exacerbation of the crisis by drawing huge campaign crowds.

On Election Day, safety measures were in place. The temperature of voters were checked where suspected at risk voters were allowed to vote in a special isolated polling booth. Voters were also asked to wear masks, to sanitize their hands, and to observe social distancing in polling booth queues. The National Election Commission of South Korea also hired more workers to be at the polling station where booths were disinfected periodically.

While it’s too early to assess whether or not the South Korea election is a success and whether it could be used as a model in holding elections during crises like the COVID-19 pandemic, Ms. Soo Suh said “the South Koreans did really accommodate to allow for voting for everyone regardless of their situation and hopefully this becomes a good case study for us later.”

Further she said: "As long as the government ... once they prioritize exercising democracy is essential, there is always a way to go about it like the Koreans did; setting up procedural systems, providing hand sanitizers, gloves, disinfecting the booths. I think it's possible."

The COVID-19 pandemic has disrupted the election cycle in many countries as much as it has affected the livelihood of people and restricted freedoms they enjoy. The Asian Network for Free Elections (ANFREL) is putting together resources, analyses, and other information through our COVID-19 and Elections special. Follow updates here: https://anfrel.org/tag/covid-19-and-elections/